It rained on us again early-very cold rain despite the temperatures were in the 60’s. Thank you to the weatherpersons for not announcing this rain shower! The winds were quite strong over 20 mph and supposed to get over 35 mph from the SW. By the time we left it was pretty close to that wind speed.
With a little over 5 hours of open nets we accrued 29 new birds and 12 recaptures. Seventeen species captured new today. 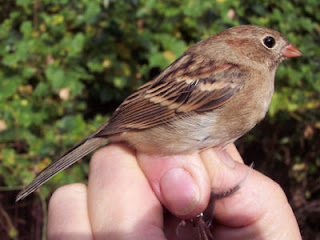 No new Blackpoll Warblers but two recaptures today with loads of fat reserves. Myrtle Warbler was the only new warbler caught and banded today.

Of interest a juvenile female Peregrine Falcon flew over the station. Beautiful bird! Pine Siskins and American Goldfinches were flying over today as well. 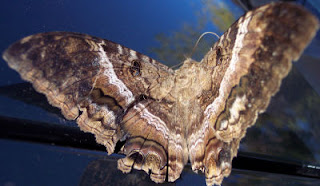 With all the great winds of the night a fresh dead Black Witch Moth was found near the Davis Besse Security building.

The wind is predicted to move to the west tomorrow with the passing of a weak cold front. Hope this helps the birds move south.