Light ESE winds did not produce much activity today. The day started out in the warm 50’s and clear. Many White-throated Sparrows around and our catch was less than 1% of what I saw around the nets. This was the day to see Bonaparte’s Gulls moving. During the point count at 4 of the 6 points I counted well over a thousand birds (20 minutes). Blackbirds mostly red-wings were also on the move today with a mix of Rusty Blackbirds included.

The day’s total was 66 new banded birds with 56 recaptures. Twenty-two Hermit Thrushes and Swainson's and Gray-cheeked Thrushes made up the bulk of the recaptures with a surprising Eastern Wood Pewee still around the area. Five species of warbler were caught with Black-throated Blue Warbler and an Orange-crowned Warbler recaptures and one of each new banded Myrtle Warbler (Yellow-rumped Warbler), Blackpoll and Bay-breasted Warblers. Warblers were scarce out there today.
Top species for the day in 5.25 hours:
White-throated Sparrow - 25
Hermit Thrush - 8
Brown Creeper - 5
Swainson's Thrush - 3
Golden-crowned Kinglet - 3
Fox Sparrow - 3
(Pretty sad when I have to include numbers lower than 10 for a species as the top birds captured! – tells you it was a slow day…). 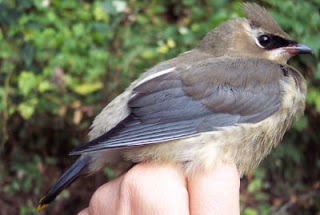 Highlights were two juvenile Cedar Waxwings and Rusty Blackbirds.
Five sparrow species caught today: Slate-colored Junco (Dark-eyed Junco), Swamp Sparrow, White-throated Sparrow, White-crowned Sparrow, and Fox Sparrow. A Yellow –bellied Sapsucker left his mark on the volunteers hands. They love to drill for blood!
A front is expected early morning bringing a good chance of rain. Another cold front is needed to move these banded birds out and bring new ones in.
Posted by BSBO Research Staff at 7:48 PM