The day started out clear and cool around 50 degrees Fahrenheit and by noon clouds came in and the wind shifted off Lake Erie. Supposed to be chance of showers this afternoon. None have transpired yet.

Today's catch included 127 newly banded birds and 63 recaptures. The Hermit Thrushes have been sticking around and for some reason they had little fat reserves today. We caught 34 different banded Hermit Thrushes (recaptures) and banded 34 new ones. There were quite a few Rusty Blackbirds in the marsh today and we ended the day with capturing 4 to band. 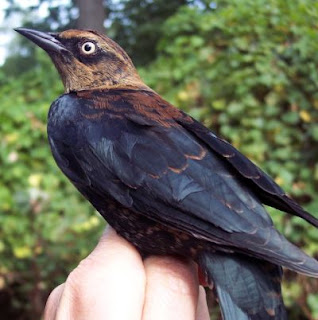 Rusty Blackbird
Top species newly banded were the numerous:
White-throated Sparrow -36
Hermit Thrush - 34
Ruby-crowned Kinglet - 11
Brown Creeper - 7
Golden-crowned Kinglet - 6
Purple Finch - 5
Eighteen species of newly banded birds for the day. We have not seen the kinglets yet in the marsh. They are around the marsh region but not near the Navarre point where the banding station is located.
Two species of warbler were newly banded today (Nashville (nice adult male and 3 juveniles (HY)) and Blackpoll Warblers) Two banded Black-throated Blue warblers (male and female) and an Ovenbird were caught again today. Myrtle Warbler (Yellow-rumped Warbler) and Common Yellowthroat were seen on the area. 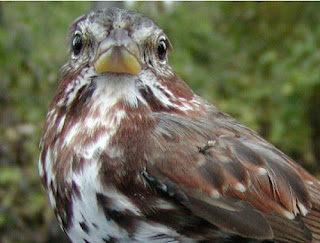 Tomorrow according to the weather will be more recaptures and similar species.