Despite the monsoon-ish weather and strong Northeast winds of this past week, we did manage to get out a couple days to document late fall migration. There are still lots of White-throated Sparrows (WTSP), Song Sparrows (SOSP), and Hermit Thrushes (HETH) following the front in the marsh region. Banded Blackpoll Warblers (BLPW) are still being captured and are adding fat reserves for their long trek south.
﻿

Kinglets were in good numbers and a fair number of Slate-colored Juncos (SCJU) beginning to appear. Warbler species for the days we were out include: Nashville (NAWA), Tennessee Warbler (TEWA), Black-throated-Blue (BTBW), Common Yellowthroat (COYE), Blackpoll, Cape May (CMWA), Myrtle (MYWA), and Orange-crowned (OCWA).
﻿

One of the last Gray-cheeked Thrushes for the season is showing his/her hatching year (HY) buffy tips of its secondary coverts. With the accented markings on this bird, it could be aged HY with binoculars. This is not always the case as the buffy tips can be miniscule on some birds.
﻿ ﻿A few White-crowned Sparrows (WCSP) are arriving on the beach ridge as well.
With species diversity declining and increasing numbers of Hermit Thrush, WTSP, Fox Sparrow (FOSP), and Rusty Blackbirds (RUBL) we should expect a fair migration for another week or two before giving way to the wintering species.

A special announcement...
For anyone interested in the future of birds, birding, and bird conservation, please consider attending the Ohio Young Birders Conference on November 5th, in Columbus, Ohio.  This event is not just for kids.  Any adult who wants to learn more about birds and nature should attend this event, where the outstanding presentations are all delievered by young people.  The cost for adults to attend is only $20.00 and this includes a morning field trip, a songbird banding demonstration, a birds of prey presentation with live raptors, fabulous presentations by our students, many great door prizes and raffle items from our sponsors, and a delicious lunch.  And the whole thing takes place at the wonderful Grange Insurance Audubon Center in Columbus, Ohio.   Visit OHIO YOUNG BIRDERS CLUB for more details and to register for this amazing event!
Posted by BSBO Research Staff at 6:03 AM No comments:

For mid-October we should have been overloaded with White-throated Sparrows, Hermit Thrushes, Myrtle Warblers, and kinglets. Only in the past week have they slowly begun appearing on the Navarre Marsh Beach Ridge in numbers. In fact, the last two days have seen capture totals close to a complete average fall total for the MYWA.
The past week proved to be a boost to this year's total with us finally surpassing an average number of birds captured for a fall season. September was quite slow and October is making up for the lull. This week's 16 warbler species include:Tennessee (TEWA), Orange-crowned (OCWA), Nashville (NAWA), Chestnut-sided (CSWA), Magnolia (MAWA), Cape May (CMWA), Black-throated Blue (BTBW), Myrtle (MYWA), Pine (PIWA), Western Palm (WPWA), Bay-breasted (BBWA), Blackpoll (BLPW), American Redstart (AMRE), Ovenbird (OVEN), Northern Waterthrush (NOWA), and Common Yellowthroat (COYE).
Here's a quiz bird for you to ponder: 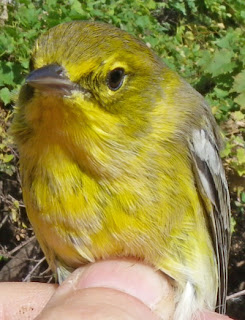 We had an opportunity to photograph three sparrow species: two Melospiza and one Zonotrichia genus.
Other highlights for the week:

Another opportunity for a comparison of species.
Here are (L-R) Winter Wren and Marsh Wren:

It appears likely that the next week should bring in the final big push of October birds. Fox Sparrows (FOSP), MYWAs, and Hermit Thrushes (HETH) should be arriving in good numbers. The American Tree Sparrow (ATSP) will be the last vanguard of the fall species assemblage with its usual appearance at the end of the month.
Take time to enjoy the season!

Posted by BSBO Research Staff at 7:13 AM No comments:

September birds are still dominating our catch with the stable presence of a high pressure system hanging overhead. Blackpoll Warblers (BLPW) and Swainson's Thrushes have been the primary species with a nice selection of many one of warbler species: Nashville (NAWA), Tennessee (TEWA), Cape May (CMWA), Magnolia (MAWA), Bay-breasted (BBWA), Connecticut (CONW), Northern Waterthrush (NOWA), Ovenbird (OVEN), Orange-crowned Warbler (OCWA), and Myrtle (MYWA). The last two warbler species represent "October" warblers.
Over the past several days we have been graced with the presence of Tufted Titmice (TUTI) and Black-capped Chickadee (BCCH) in the nets. We normally see a dispersal migration of these species in October along the beach ridge. Are they coming south, going north, or sliding along the coast?

A first in over 20 years of fall banding efforts was this Pine Siskin (PISI). Many flocks have been seen/heard flying over the banding station this week following the ridge. 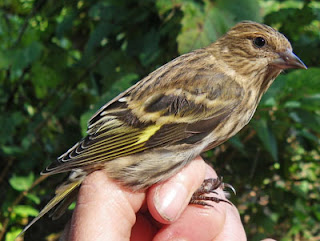 A nice view of a adult male MAWA who is probably several years old noting the amount of black on its face even in basic plumage.
Also of note is the black upper tail coverts diagnostic of an adult male MAWA.

Highlights of the week were:

Enjoy a rare opportunity to demonstrate a side by side view of Winter Wren (WIWR) and House Wren (HOWR). Note the differences in color and in the size of the body and tail length. The WIWR is much darker than the HOWR.

Enjoy the beauty of the season!
Posted by BSBO Research Staff at 5:46 AM No comments: