Update from BSBO's Navarre Marsh Songbird Banding Research Station posted by Mark and Julie Shieldcastle:
It has been quite a spring season! We had three good solid waves of spring songbirds this year. Not every year, are we blessed with the right winds and weather that results in the Lake Erie Marsh Region having a "wave trifecta" to produce the volume that each of the migration waves can create.

To review the update of the banding station activity for the last couple weeks you can go to the Navarre banding page of the Observatory website. http://www.bsbo.org/passerine/spring_passerine_migration_monitoring.htm

In a season of highlights, the most significant has to be surpassing the all-time spring banding total for the Navarre banding station, which was first run on a daily basis in 1989. The old record was 10,111 new birds banded in one soring season and we surpassed this on Tuesday May 31st. Final totals for the season will be posted on the website after the station closes on June 4th.

This accomplishment would not have been possible without the great assistance of our passerine technican, Cliff Hoyt, and all of our mighty volunteers. Our hat goes off to the fine work the team has accomplished this spring!

Here are some of the highlights of the past couple weeks: 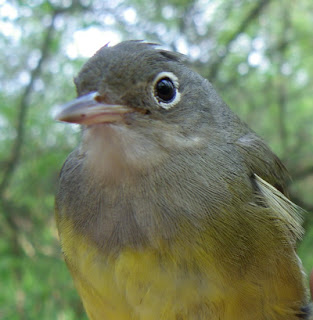 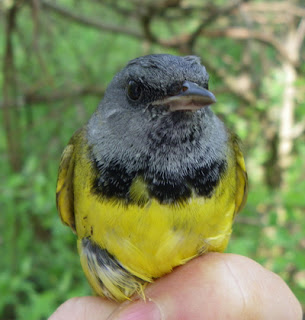 MOWA male
A nice late May surprise was this Summer Tanager (SUTA). 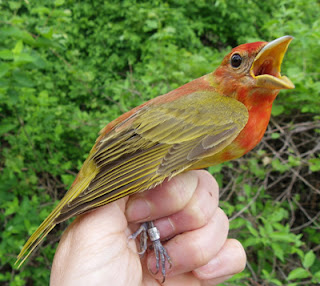 This is a Second Year male with its splotchiness of gold and scarlet. The top sides of these birds are interesting, and since most do not get an opportunity to see this view, enjoy a molt in progress. 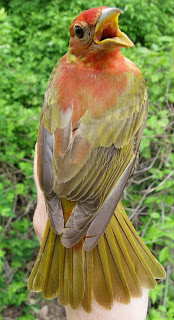 Why not add the best warbler in the land to the highlights? 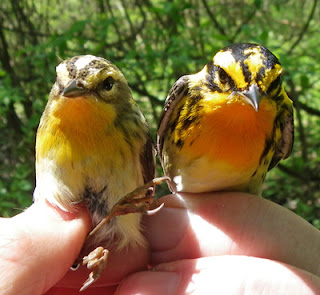 Female and male Blackburnian Warbler (BLBW)
Can you guess why this four-letter code doesn't fit the norm?
Let's hear it for this girl! 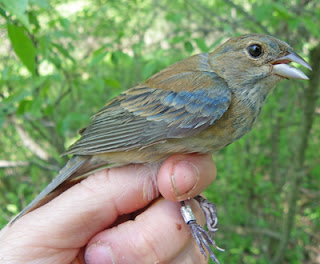 She is sporting a flash of "Indigo" in her attire. 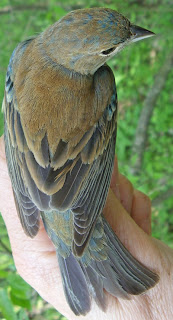 And since this is the last wave of songbird migration,
we must talk about flycatchers! 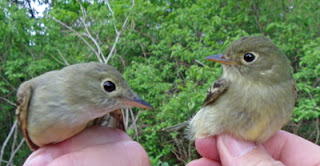 The ACFL has a light green head and eye ring with an elongated body shape, whereas the YBFL has a rounded head and bright yellow eyering and dark green yellow belly.
To top off the season we had the rare opportunity to catch both a
Black-billed Cuckoo (BBCU) and Yellow-billed Cuckoo (YBCU)
at the same time! Here are their profiles:
BBCU on the left and YBCU on the right 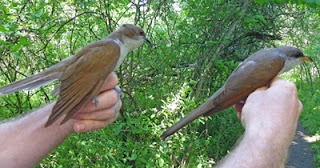 And here is the top view: 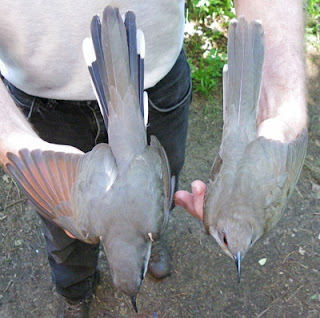 Note the rusty wings on the YBCU (left) and it's larger white tail spots  compared to the BBCU (right). The contrast of the rusty wing color against the gray body on the YBCU and the gray wings and body of the BBCU should make it easier to identify cuckoo species when the bird is in flight, rather than trying to get a good look at the amount of white in the tail of each. 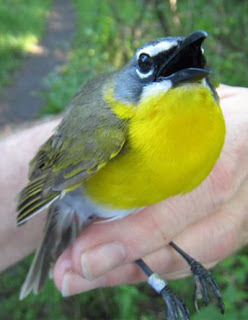 Male Yellow-Breasted Chat (YBCH)
Cool Bird Banding Fact #117
Male YBCH's have a black mouth lining (as shown inthe photo, above),
while females have pink. Pretty cool, eh?!
With spring migration all but over, why not get your birding "fix"
by helping on the Ohio Breeding Bird Atlas and pay it forward to Bird Conservation!
For those who aren't on Facebook, the answer to the last blog post was female Cape May Warbler.
Posted by BSBO Research Staff at 6:53 AM No comments: