The Neotropic migrants are slowly making their way north. This week saw considerable lake winds which kept numbers down along the Navarre beach ridge. The cooler temps along the lake have slowed the leaf out so the birds are easier to see in the marsh region right now. It will not take long for buds to pop which will start happening with the warmer temps forecast for this week.

Myrtle Warblers (MYWA) are on the increase as are the Ruby-crowned Kinglets (RCKI) with both species turning over to females. The next SW breeze will bring in the first wave migratory songbirds to the area. We have seen some early one-ofs, but this next burst of warm tropical air will bring the myriads of migrants and keep them coming until the end of May!

Speaking of MYWAs, can you tell me what age and sex this MYWA is? One of the advantages of bird banding is the ability to accurately age and sex them. There are some species where both sexes look similar (monomorphic). Sex cannot always be determined and research there's often an overlap in wing measurements making it next to impossible to separate many males from females. Obtaining demographics of a bird population is important in knowing how well the species is doing. If there were only older birds in the population and very few birds hatched the previous year, also known as Second-year birds (SY), then a red flag of concern for its well being and future should be raised.

Note the blue arrow pointing to the primary coverts below. The coloration of the coverts are dull brown and worn which tells us that the bird was hatched last year and is a second-year bird. It can be identified as a male with the large black mask and vest. 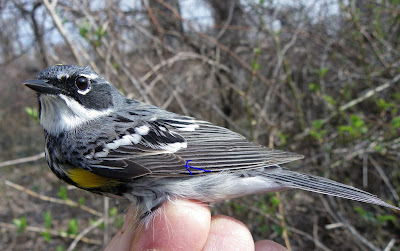 *Denotes birds only seen at Navarre, the others were actually banded at the station.

Note the differences in overall body size, bill size, wing coloration, and tail spot coloration on the two to assist you in determining what "yellow" bird you have.
Other highlights for the week:

Stay tuned, the full first wave of songbirds will be arriving soon! Hope you get outside to enjoy spring!

Quiz bird answer..... Gray Catbird (GRCA) stay tuned for more GRCAs will be arriving soon in the second wave of migrants which usually occurs around May 7th-13th.

Also BSBO is hosting public banding demonstrations every Saturday in May at the Observatory. Time is 10:00 - 11:30 AM with extended hours on May 11th from 7 AM - noon.

Follow the migration with BSBO and Kenn Kaufman with our migration blog http://cranecreekbirding.blogspot.com/


Posted by BSBO Research Staff at 3:48 PM No comments:

Soon we'll have to say good bye to the wintering birds such as American Tree Sparrow and the early March species like the Fox Sparrow (FOSP), Golden-crowned Kinglet (GCKI), and everyone's friend the Winter Wren (WIWR). But we'll open the door for the next group of species arriving in the Lake Erie Marsh Region.


The first wave of migrants will be arriving soon with a warm burst of wind from the SW (Average 24 April). We have had some pre-wave migrants along with  Hermit Thrushes (HETH) rolling into the area as well as male MYWAs. With the strong SW wind last week we had a few individuals show up that won't peak until the second wave such as Yellow Warbler, Scarlet Tanager, and  Rose-breasted Grosbeak. Other first-wave birds include bird species that over fly their normal breeding range. These include species that we see a few of in mid-to-late April such as the Louisiana Waterthrush (LOWA) and Summer Tanager (SUTA). However, the Summer Tanager has been expanding its breeding range north so its natural history is changing presently.


Some Highlights for the week:

Look for the first wave of migrants this coming week to occur with male Myrtle Warblers, White-throated Sparrow, male Ruby-crowned Kinglets and Hermit Thrushes bringing in the lead. Check Kenn Kaufman's Birding Pages for up to date migration reports and predictions. http://cranecreekbirding.blogspot.com/
Get outside and enjoy the sights and sounds of spring!


Posted by BSBO Research Staff at 2:34 PM No comments: