To end the fall migration season on a high note, BSBO hosted the Inland Bird Banding Association's (IBBA) annual conference. More than 60 participants came from as far away as Minnesota and Texas to join us for this regional bird banding event. On Friday evening BSBO's Executive Director, Kimberly Kaufman, kicked off the festivities with a presentation about the Observatory's many research projects and education and outreach programs. Many thanks to BSBO's Birds & Business Alliance partner, OurGuest Inn & Suites, for hosting Friday night's opening activities.

Saturday morning's activity was a banding workshop at BSBO where several nets were opened to catch birds for banding, teaching aging and sexing techniques, and overall sharing of information and knowledge among the participants. 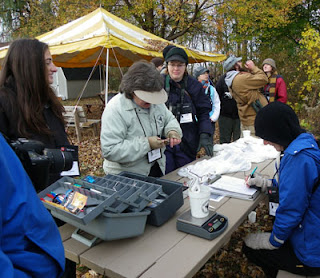 In the picture above, Julie West (gray jacket), a BSBO research volunteer, shares her knowledge and expertise with fellow banders. Julie operates a banding station at the Nature Center at Shaker Lakes, a partnership project with BSBO.  White-throated Sparrows (WTSP) were the most numerous species banded for the morning. Fifty-seven birds were caught with 3/4ths of them being WTSPs. We did capture a Lincoln Sparrow (LISP) which was a treat for the crowd.
Saturday afternoon featured indoor presentations, hosted by our gracious partners at Ottawa National Wildlife Refuge. The presentations covered banding results in Illinois, Foraging and Territory Size in Veery in mid-Michigan, Tennessee Warbler Stopover Ecology in the southern Appalachian Mountains, and Birdlife International's Response to the Deepwater Horizon Oil Spill along the coast of the Gulf of Mexico. Bruce Peterjohn, Chief of the Bird Banding Laboratory (BBL), gave an update on what was happening at the Lab. The presentations provided many thought provoking topics for the group.

The day ended with a superb banquet provided by BSBO Birds & Business Alliance partner, Taste Your Food, LLC.  Keynote speaker, John Tautin, retired Chief of the BBL, presented an interesting and informative program on the first 100 years of Bird Banding.

Hats off to BSBO's Research Director Mark Shieldcastle, who, along with the assistance of some of BSBO's fabulous volunteers, did a fine job in organizing this conference. Here he is, out standing (and outstanding) in his field! 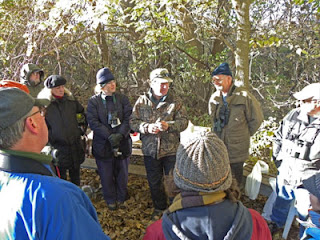 Sunday featured a field trip to the Navarre banding station. Thirteen folks arrived at the banding station at 9 AM to see that the Observatory volunteers were already hard at work processing the first round’s catch. Can you believe we only netted one WTSP the first round?! (They made up for it later.) We did capture some special birds including an American Woodcock (AMWO), Yellow-shafted Flicker (YSFL), Brown Creeper (BRCR), Carolina Wren (CARW), which some never get to see), and fifteen Fox Sparrows (FOSP).

The Carolina Wren was a good example of differences in perspective. Here, in northwest Ohio, they are common enough that some take them for granted. But to visitors from Minnesota and northern Michigan, the bird was a real celebrity!  A CARW in northern Minnesota would light up the rarebird alert like a Great Gray Owl would here. It was a great reminder that even our more "common" birds are worth appreciating.

The day’s efforts resulted in 102 new birds and 10 recaptures.  According to our data, one of the recaptured WTSPs had been hanging around for the past two weeks. We suspect that the weather forecast for week's end will "push" some of these reluctant migrants along on their way. 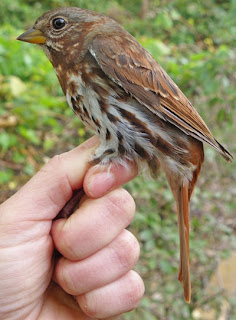 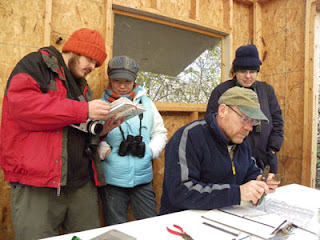 The trip to Navarre was a great way to cap off a wonderful weekend. Many thanks to all the volunteers and the BSBO staff who put much time and energy into this conference! And, speaking of thanks…

The 2010 fall banding season resulted in one of the highest total number of banded birds (for the fall season) in the history of the project and the volunteers did outstanding work to see that everything went smoothly. Our sincere gratitude to all of you for your great efforts and we look forward to working with you again in the spring; it will come sooner than you think!

Posted by BSBO Research Staff at 9:57 PM No comments: