Southwest winds produced another adequate busy day. This appears to be the normal this year of around a 350 new birds per day. Whew! It has been quite a spring for birds! We have surpassed an average spring for number of new banded birds. It is not a contest by any means. We are close to banding 8,000 birds for the spring and we have 20 days left. It makes me tired and wondering where are they are coming from? I will really be bored on a slow day after this spring. You get into the groove of things and expect the routine to maintain itself. The great volunteers and I will take whatever the birds give us, slow or otherwise.

The third wave has not hit yet. The Empidonax Flycatchers are not here yet. This southerly wind is produced by a high pressure system. When the low pressure cell brings up the tropical winds, the flycatchers will come.

Highlights for the day were an Orange-crowned Warbler and the two banded Connecticut Warblers we banded yesterday. There is still quite a variety of warblers around. We had 24 species including Tennessee, Orange-crowned, Nashville, Northern Parula, Yellow, Chestnut-sided, Magnolia, Black-throated Blue, Myrtle, Black-throated Green, Blackburnian, Western Palm, Bay-breasted, Blackpoll, Black-and-white, American Redstart, Prothonotary, Ovenbird, Northern Waterthrush, Connecticut, Mourning, Common Yellowthroat, Wilson’s, and Canada.
Top 9 species:
Magnolia Warbler – 67
Wilson’s Warbler – 31
Swainson’s Thrush – 25
American Redstart – 24
Bay-breasted Warbler – 14
Nashville Warbler – 13
Chestnut-sided Warbler – 12
Gray Catbird – 12
Traill’s Flycatcher – 10
(Traill’s Flycatcher is given to the Alder/Willow Flycatchers. In banding we can only differentiate between the two by measuring wing feathers. The overlap is so great we can only determine about 10% of them.)

Here is a mystery bird for you! I have given it to you before so hopefully it looks familiar. I like its subtle colors. Enjoy! 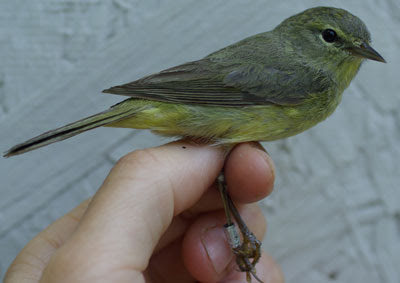 How about the look of this lady Yellow Warbler?! The older females can have rusty streaks on their breasts but this one is lighter yellow than most males. I have been fooled on occasion with what I have called a second-year male was actually an older female. We caught them later in June and well let’s say I found them with brood patches. 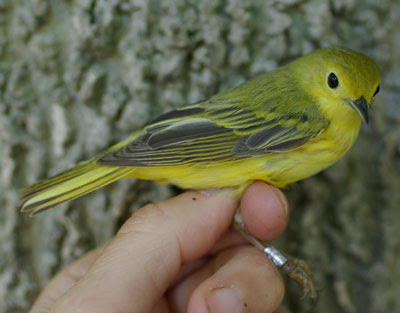 There is always something in nature to keep you honest and humble. The quiz bird is an Orange-crowned Warbler.
Posted by BSBO Research Staff at 8:15 PM