The most unusual thing ever happened today! Remember when I said Mark saw a Chuck-will’s widow back on 18 April. He speculates it may or may not be the same bird after all this time. Take a look at these photos! So many cool things about this bird. One, it is a huge bird almost twice the size of a Whip-poor-will. Two, it has a huge mouth which you could fit a baseball if not a softball in it. (it was filled with June Beetles-it would have made a great horror movie). Three, it has a modified toe that looks like a comb to clean its rictal bristles (modified feathers on the face that look like whiskers). Four, it is a neat looking bird if I do say so myself! 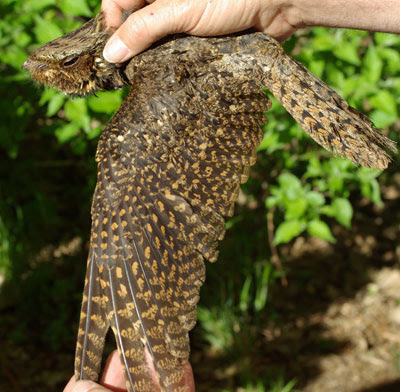 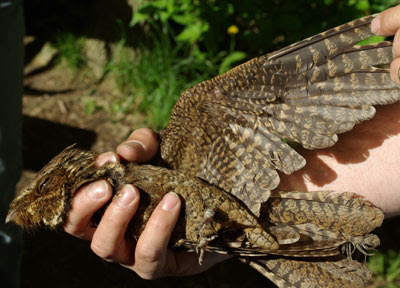 Middle toe of the Chuck-will's-widow!

Back to reality, we netted 281 new birds and had 31 recaptures. Since we are catching quite a few flycatchers and Red-eyed Vireos, I must concede that it is the start of the third wave of migrants. The reason I do not want to admit it is that this means only a couple more weeks of spring migration left. BUT, it will be good regardless just different species and not so colorful. We still had 22 species of warblers heard or observed including a Blue-winged, Tennessee, Nashville, Northern Parula, Yellow, Chestnut-sided, Magnolia, Black-throated Blue, Myrtle, Black-throated Green, Blackburnian, Bay-breasted, Blackpoll, American Redstart, Prothonotary, Ovenbird, Northern Waterthrush, Connecticut, Mourning, Common Yellowthroat, Wilson’s, and Canada. Male Black-throated Green Warbler and several Blackburnian Warblers were singing at the site besides the third wave warblers Wilson’s, Canada, American Redstart, and Mourning.

Highlights of the day were of course the Chuck-will’s widow, four Philadelphia Vireos, a nice looking Blue-winged Warbler, and a Myrtle Warbler graced us with her presence.

As you can see and read there is more to see of migration! Get out and enjoy!