Light southwesterly winds made for a good start of the morning. By midmorning, the winds shifted back off the lake and then to the southeast as predicted by the weather folks. Lots of highlights for the day including another male Golden-winged Warbler, a brilliant cheeto-head Blackburnian Warbler (he glowed from the opposite end of the mist net!), and a nice looking male Northern Parula. We finally caught a Baltimore Oriole this spring, both an after-second year male and female. She was an older lady with dark brown feathers coming in on her head. 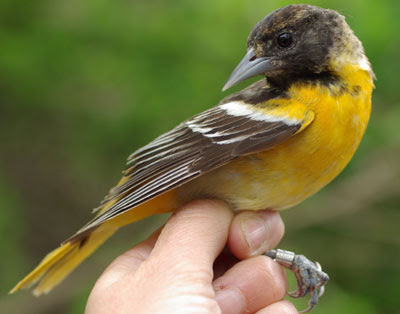 A nice variety but not the volume yet, that will come tomorrow or Friday depending on when the winds remain out of the south. We mustered 166 new banded birds with 31 recaptures. AND I must tell you this is very exciting! We caught a Nashville Warbler we banded in April of 2007 today!!!! Now if that is not a great catch what is?! To catch a true migratory bird (a species that does not breed at this latitude) twice on the same area two years apart is phenomenal! The banding site is only around 7 acres in size and to capture it in a net on this small location where it could have landed anywhere near here and not have been caught. So let’s say it for the importance of migratory stopover habitat. It is just as important as the rainforest and breeding areas. Take one of these away and what does it do to the birds? Hmmmm… something to ponder.

Can you see him glow?!

All the brown thrushes were captured today except the Gray-cheeked. This is the time for the male Kirtland’s Warblers to be coming through so I have my fingers crossed that some day I will see one up close and personal.

Enjoy the next few days! They will be great!