Connecticut Warblers are here! Come and see them!

Did I not say today was going to be good?! So what if there were a few raindrops later? The weather people did not predict the weather very well for the overnight and morning hours. However it was for the better! Did you see the sun this morning? I first went ouside this morning only to see light fog. I check the wind direction using the Davis Besse steam stack as my wind indicator. The wind was out of the SW. Hot diggety, I thought to myself! I helped set up the nets and left Mark and the crew to do the dirty work while I ventured over to the Observatory to help with school programs. The kids were really interested in birds and stayed attentive so it made for a great day. Always a great day when you see young people inspired by nature!

A great day was had at the banding station. As I had mentioned that Connecticut Warblers would be coming in on this front. Lo, and behold, they did! I am not always correct but better than some weather people’s forecasting. Can you believe it five, count them five, Connecticut Warblers today! Those of you that have stopped birdwatching for the spring may want to dust off your binoculars and head out here to Magee Marsh Wildlife Area and Ottawa NWR. Tonight is to be a SW wind and it will shift by late morning to the west and then northwest. I would say come on out and get your looks at these late migrants!

Netted for the day were 170 new birds with 23 recaptures. Flycatchers were number one today as one would expect. We caught our first Eastern Kingbird for the spring too. Other highlights included 13 Mourning Warblers, a Philadelphia Vireo, an Eastern Kingbird, and a Lincoln Sparrow. Eighteen warblers were observed on site including Tennessee, Yellow, Chestnut-sided, Magnolia, Blackburnian, Bay-breasted, Blackpoll, Black-and-white, American Redstart, Prothonotary, Ovenbird, Northern Waterthrush, Connecticut, Mourning, Common Yellowthroat, Wilson’s, Canada, and Yellow-breasted Chat. Did I say Blackburnian Warbler?!!!! See?! I told you that spring is NOT over yet!
Female Connecticut Warbler 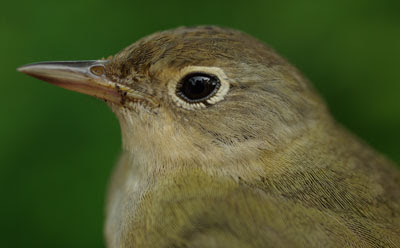 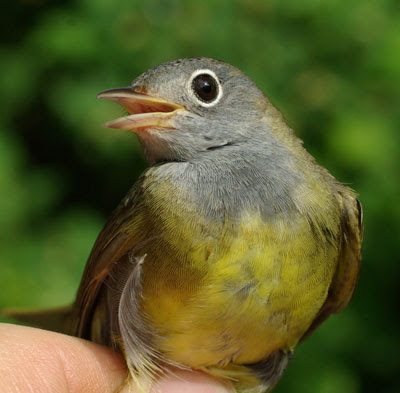 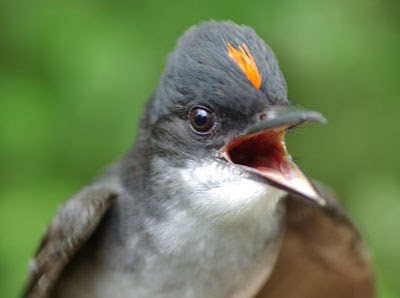 Can you see this fire red top most times on an Eastern Kingbird? Nope. Both sexes have the red top knot.
Do I need to say more to convince you to get out and look for those late spring migrants?!
Posted by BSBO Research Staff at 5:22 PM