Another big day for all who were able to venture outside! It keeps getting better and better! I spent the day conducting the banding demonstrations at the west end of the Magee Boardwalk while Mark and others worked their tails off in Navarre. I spoke to almost a thousand people about the importance of the Lake Erie Marshes to these neotropical migratory birds. The evidence is the experience when you can see the birds busily feeding within inches of you. They are on a mission to pork up for another flight tomorrow if winds are favorable. Which they are not forecasted to be, the winds are to turn tonight to the NW. They picked up to almost 40 mph today out of the SW. What a wind it was! However, it pushed the birds to the north side of the Magee Marsh beach ridge so folks could view them out of the wind.

As far as the Navarre site, they did well with 391 new banded birds and 40 recaptures. One of the recaptures was a foreign Gray Catbird! This bird was banded in Michigan last fall. Could you tell the last couple days the catbirds were increasing in numbers?! If you could not you must have been not able to hear because they are making their crazy mimic songs all over the place! I still wonder how a female Gray Catbird is ever attracted to that song! The first Yellow-bellied Flycatcher appeared today with another 24 warbler species gracing them with their presence! It was a good day everywhere! If it were not for the strong winds the nets would have been more efficient at holding birds in the net. By afternoon the winds were so strong the nets are stretched out like a trampoline and are not as effective.

Here is a pair of Northern Parulas. The female is a second-year bird and has no rust coloration on the breast. Most adult females will have a small amount of rust on the breast. 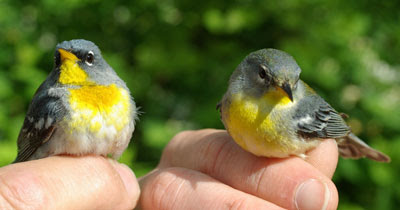 Here are examples of the variation in Cape May Warbler heads (first bird is Second-year male): 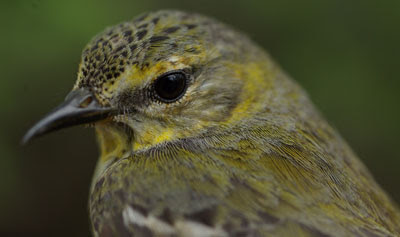 Take a look at this guy! 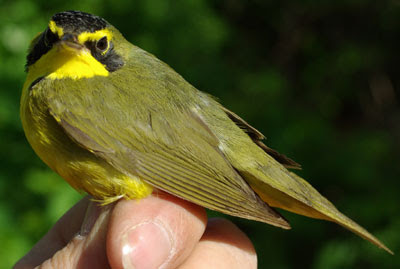 And the best glowing warbler in the world! 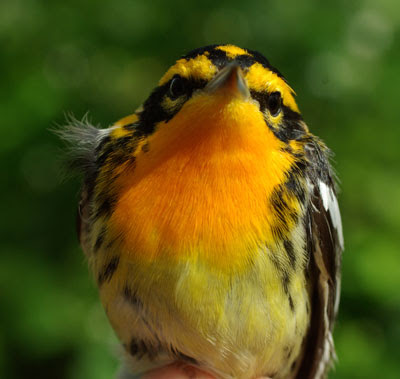 So are you tired of spring yet?! Or is it just tiring you out?!
Enjoy!
Posted by BSBO Research Staff at 7:34 PM