This was the first day of the second wave! Did you feel the wave?! I am sure if you were anywhere in the Lake Erie Marsh Region you did. The buzz of wings and songs echoing all over the place at daybreak signaled the day was going to be good! The southwest winds blew in the birds. We can attest to it at the banding station with a total of 578 new banded birds and 41 recaptures during 9 hours. Twenty-eight warblers graced us with their personal presence and we gave them presents of a band before sending them on their way! Nashville, Chestnut-sided, Black-throated Green, Tennessee, American Redstart, Wilson’s, Northern Parula, Blue-winged, Western Palm, Black-throated Blue, Yellow, Magnolia, Myrtle, Northern Waterthrush, Black-and-white, Canada, Hooded, Bay-breasted, Blackpoll, Common Yellowthroat, and Ovenbird were the warbler species we captured today. The Magnolia Warblers have not arrived in their normal force but they usually wait until the second pulse of this second wave to carpet the trees with yellow, black and white.

Sharing with you some of the yellow vireos….. 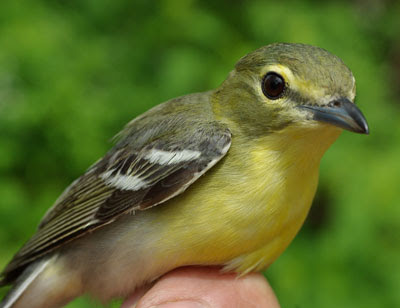 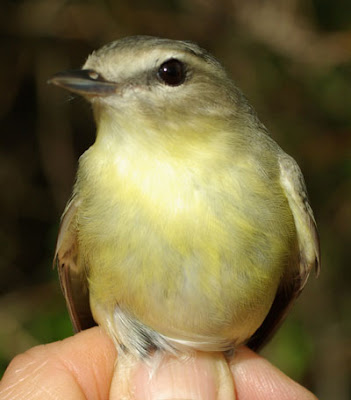 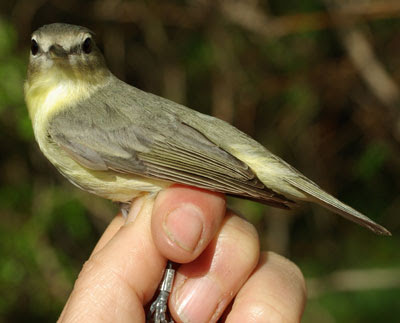 Side -view of the Philadelphia Vireo (note:yellow wash to the throat and belly)

And a handsome male Bay-breasted Warbler! 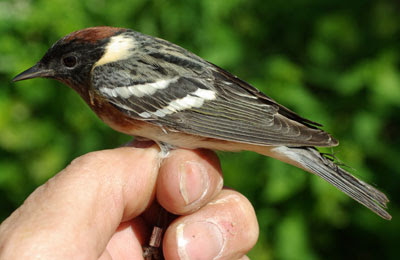 This weekend will be great!