High pressure in place this morning, so the light southerly winds turned off the lake by midmorning. Cool temps made for an easier bird banding day. It was not the rush we have been seeing in the past week. Two hundred and ten new banded birds with 18 recaptures including 27 species of birds. Nine warbler species were banded with 15 species observed on site. An American Redstart was singing on site while we were closing the nets for the day.

Highlights for the day were the beautiful male Golden-winged Warbler, Blue-winged Warbler female, and another male Rusty Blackbird. 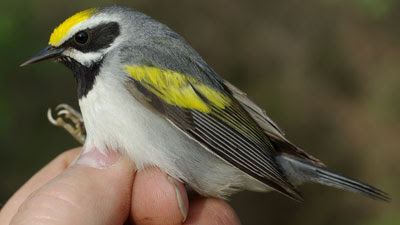 Myrtle Warblers (MYWA) surpassed their spring record of all times with over 1200 MYWAs banded this year. They have been numerous!
Looking forward to the next southerly wind!