We caught a Winter Wren today!

Winds today were out of the northeast so birds were not concentrated on the ridges but it was nice to be outside with the sun shining. With that said, there was still a nice selection of birds around.

Guess What?! We caught a Winter Wren today! A lone straggler not wanting to be in the Upper Peninsula of Michigan or farther north just yet. Of course it feels like winter or at least April as far as the temperature goes. We had a big midge (Chironomid) hatch today, the light green ones. So there was plenty of food for the birds. Not much talking went on while checking nets otherwise we would become flycatchers!

The day’s catch consisted of 147 new birds and 46 recaptures. It actually felt like more recaptures but the numbers tell the story. It is to be expected to have all these recaptures. Who would want to fly north into a head wind? A couple old banded Baltimore Orioles appeared today along with a few old banded Gray Catbirds. Yipppee! More Gray Catbirds! There was one this morning on the point count that imitated an Eastern Towhee perfectly in amongst his garbly song. Thirty-four species of new birds captured today with 19 species of warbler amongst the catch. 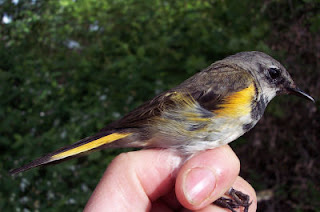 American Redstart males exhibit delayed plumage maturation whereby males hatched last summer (second-year) birds look like females but have some black feathers on some portion of the body usually found on the face and chest. The advantage is to usurp territories and mate with the female without drawing attention to themselves. Pretty sneaky! 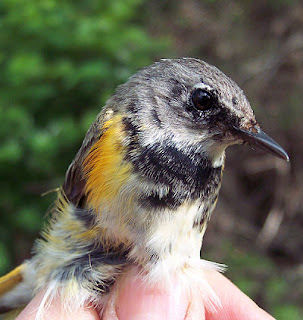 Highlights for the day are the Winter Wren, Northern Parula, and a Great Crested Flycatcher. The Great Crested caught the fancy of many of the volunteers. “Such a large bill on this flycatcher” was the common response.

Make time to get outside and search for something new! Enjoy Spring!