Light fog this morning which cleared up with a southeast winds and sunshine all day. Nets were up 6 hours 40 minutes with a capture of 122 new banded birds and 68 recaptures. Several more old banded Yellow Warblers and the Sharp-shinned Hawk we banded yesterday. The day’s catch included 31 species with 14 warbler species. Highlights for the day were a Summer Tanager female, Yellow-bellied Sapsucker female, Eastern Kingbird, and several Ruby-throated Hummingbirds. We heard the Summer Tanager calling when we set up the nets this morning and sure enough this afternoon she came low enough to visit the net. It was a surprise to see the sapsucker. They are normally gone by mid-May. 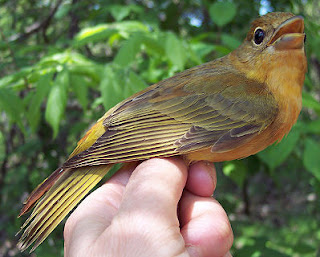 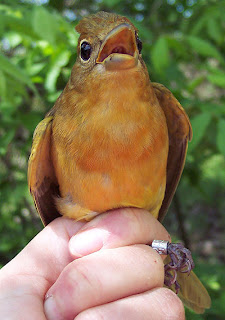 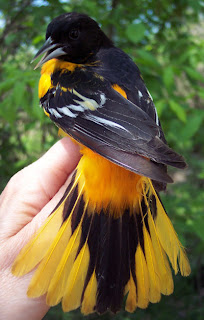 A nice After-second Year (ASY) male Baltimore Oriole
with its great tail pattern to show off.

An interesting sighting today, while walking up to a net I saw a White-crowned Sparrow near the net on a log displaying its crest to another White-crown caught in the net. It was walking up and down the log with its feathers on its crown all poofed up. It looked like a black and white afro on its head. I have seen the crest raised so it looks like a point on its head but I had never seen the feathers on its head raised this much. This was like a small black and white striped golf ball on top of its head. There is never a boring moment in nature—that is for sure!

*most of these were females coming to the ground to look for nesting material.
The weather may cause us to dodge raindrops tomorrow but it looks like a good chance for the second wave of migrants to make a push. Tonight the winds are to be south southeast with a low in the 50’s. It could be good for bird watching tomorrow. We shall see if the weatherman gets it right.
Enjoy the day!
Posted by BSBO Research Staff at 6:22 PM