Great Day to be out birding!

A cool west wind kept things cooler than normal for May. The birds are hanging out here so everyone should be having an enjoyable time in the Lake Erie Marsh Region birdwatching. For seven hours the nets were open and we captured 151 new birds and 85 recaptures. There are a lot of banded Baltimore Orioles hanging out for several days. No sign or sound of the Worm-eating Warbler today. We had 40 species captured including 20 warbler species. At the station there were at least two Red-breasted Nuthatches. One was singing (if you call it that), while one was in the net. No sign or sound from a Connecticut Warbler in Navarre but it is early yet. They will be coming in now through the end of the month. Mourning Warblers will peak probably the next time the winds shift to the SW which looks like Sunday and Monday. It is nice it will occur on a holiday weekend so folks can enjoy the birds.
Top 7 species banded:
Magnolia Warbler - 17
Nashville Warbler - 14
Gray Catbird - 12
Yellow Warbler - 11
Tennessee Warbler - 10
Common Yellowthroat - 8
Red-winged Blackbird - 6

These Indigo Buntings are of two ages- the right male bird is a second-year bird (SY) (hatched last summer) and the male on the left is an after-second year (ASY). Note the primary coverts on the left bird are black feathers edged with blue and the right bird the coverts are brown retaining his immature feathers. We have caught SY males that have looked like the left bird except the primary coverts were brown so just because they are blue does not make them an adult ASY male. You can usually pick this coloration contrast using binoculars. Next time take a closer look when admiring an Indigo Bunting to see if it is an SY or ASY male. Females have similar traits with the primary covert coloration for each age class however it is hard to distinguish it in the field. Female SY primary coverts are brown edged brown and adult ASY females have brown coverts edged with blue. It is subtle coloration not a bright blue as the male. 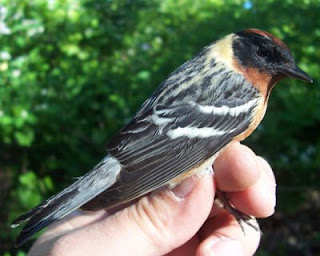 Enjoy the beauty of this male Bay-breasted Warbler.

Posted by BSBO Research Staff at 11:44 AM