Birds have been steady throughout the week...

Even with earlier northeast winds the bird numbers have been steady. After an early morning of little to no wind, the winds shifted to the southwest after about 09:00 AM. While driving through the marsh to get to the banding station a Common Nighthawk swooped in front of my truck chasing a moth. All I saw was the white bars on its wings as it passed by. That was a good sign. I had not yet seen or heard any nighthawks this spring.

Forces were split again today with Woodmore School second graders visiting the BSBO Nature Center. We shared the banding experience with 120 kids and hopefully inspired them to appreciate what they have in their backyard. 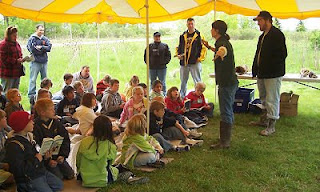 Phil Chaon, OYBC member and Kim
sharing their knowledge to the second-graders.

In Navarre we had 185 new banded birds with 75 recaptures with nets open seven hours. This included 34 banded species and 19 warbler species. An Olive-sided Warbler was spotted near the banding building but not seen again today.
Highlights for the day were Acadian Flycatcher, Ruby-throated Hummingbird, and another Worm-eating Warbler (3 for the season).

The day should be just as good tomorrow as it was today with the winds out of the southwest. These are not tropical winds so no big push of birds. There are second wave birds here in reasonable numbers. At least more than earlier in the week, whereby there was one of this species and one of that species seen. Now there are multiples of each species of the known common ones like Magnolia and Nashville Warblers.
As always enjoy the season, no matter if it still feels like April!
Posted by BSBO Research Staff at 7:29 PM