We arrived at the marsh to SW winds. Judging by the amount of song in the marsh the winds must have not turned until early this morning. It was a clear and beautiful morning none the less. I heard my first Purple Martin, Eastern Bluebird, and Purple Finch of the year. Mark conducted the point count this morning while I tended to other spring preparations for opening the station. He was fortunate to have a pod of birds at a point which included a Pine Warbler, a couple Myrtle Warblers (Yellow-rumped-although I have heard they may change the Yellow-rumped back to the Myrtle so you may want to get used to the name Myrtle), Blue-headed Vireo, and a Purple Finch. He gets all the luck! Not really because I got to remove the first House Wren from the net! Now, after about 50 to 100 more of these and I will not think it is so great. The first for the area was seen on April 1st at Magee Marsh Wildlife Area according to the e-bird records. 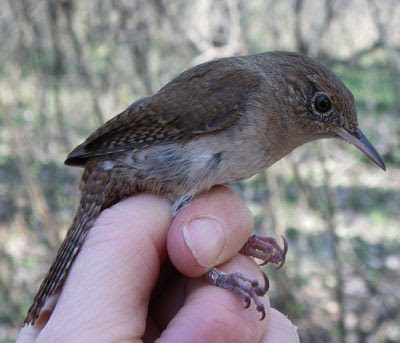 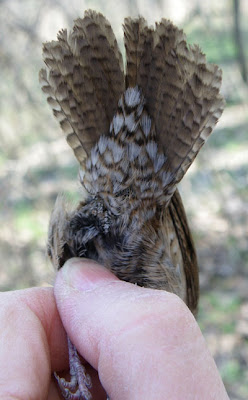 The catch of the day included 45 new banded birds and 4 recaptures. The top species was the Hermit Thrushes. They appeared to be everywhere I looked.
Top 4 species:
Hermit Thrush- 19
Ruby-crowned Kinglet- 6
White-throated Sparrow- 5
Northern Cardinal- 4
We have only just begun to see one of my favorite birds to capture in the mist nets! The White-throated Sparrow. There was a couple serenading us as we raised the nets this morning. The males are arriving. Some used to say the white striped headed ones were the males and the brown headed ones were the females. That idea has been flushed with research that shows that the brown striped morphs favored more grassland/shrub habitats to nest. The white striped morphs tended to select the more wooded habitats. The sexes of White-throated Sparrows are determined by the length of their longest primaries in a folded wing position. This is also known as the wing chord measurement. Males have wing chords of 75 mm or greater and females are determined to have wings of 68 or less mm. Of course there is great overlap between 69 and 74 mm. You have to remember that there is great variability even in males and females of all species.

Tomorrow should be another good day for the short-distance migrants. Don’t count your chickens before they are hatched yet and wish for the multiple species of warblers. Afterall, it is only tax day today; so we have at least 6 more weeks of enjoyment of the best spectacle in North America! Do not wish it to be here all at once! Enjoy the day!
Posted by BSBO Research Staff at 8:40 PM