Fog and strong NE winds did not deter the White-throated Sparrows!

It would seem that if you have a wind there would be no fog. Or so one would think. However, there must have been lots of warm air above us that created fog from the wind blowing over the cool lake. It was foggy the whole morning until it began to rain. Regardless of the weather, the White-throated Sparrows were in good numbers. Fortunately most of the small birds stayed still. We did catch five Blue-gray Gnatcatchers in the heavy fog mist. There were mostly females. Note no black eyebrow. 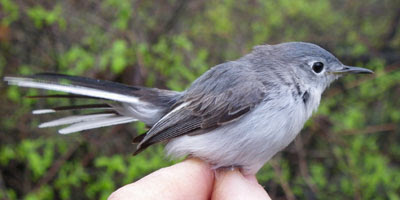 Seventy-two new banded birds and 12 recaptures were the catch of the day in 126.5 net hours. Highlights were four species of sparrows including Field, Chipping, Swamp, and White-throated. Another highlight you can find on the BSBO Facebook page www.facebook,com/bsbobird
Fourty-four species observed today including Myrtle and Western Palm Warbler.
Top 6 species:
White-throated Sparrow- 32
Hermit Thrush-9
Blue-gray Gnatcatcher-5
Swamp Sparrow-4
Ruby-crowned Kinglet-4
Field Sparrow-3
It looks like when the high pressure gets out of here which is slowing moving to the east, we will have southerly winds bringing the birds to northern Ohio. This has been about the tenth day of easterly or northerly winds which has not be conducive for migration north.