On the cusp of the first wave...

There were calm winds when we arrived in the marsh this morning but winds began to blow out of the south at sunrise. Of course White-throated Sparrows were serenading the dawn and a couple Myrtles and Nashvilles chimed in as the sun rose. A beautiful day to be outside, I must say. Tomorrow looks to be better for birds with the winds to remain southerly overnight. Quiz bird from the top side:

Eighty-four new banded species with two recaptures tells us that the earlier banded birds have left for northern climes. Nine warblers were heard or seen including Blue-winged, Orange-crowned, Nashville, Yellow, Yellow-rumped, Western Palm, Black-and-white, and Common Yellowthroat. Highlights were hearing a Baltimore Oriole and catching a Red-breasted Nuthatch and a Blue-winged Warbler male. 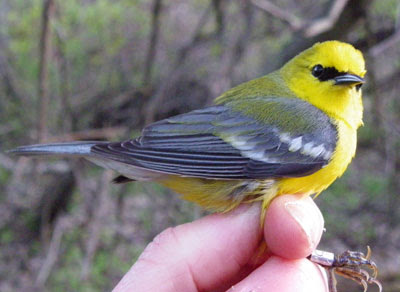 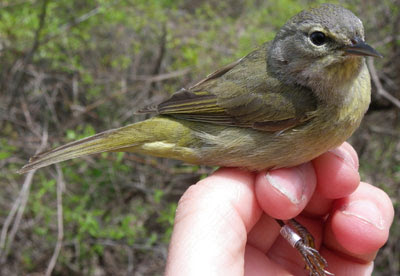 Bird with a slender Vermivora, fine gray streaks on chest, split eye ring, and no wing bars or tail spots says it is an Orange-crowned Warbler! There was no orange on the crown of this bird making it a female. Enjoy!
Posted by BSBO Research Staff at 4:42 PM