A Great Time to be OUTSIDE!

Today was such a great day to be outside! I hope everyone got out today because it was spectacular and I think tomorrow will be even better. You may have to dodge a few raindrops but the temps are to be in the low 60's overnight and in the mid-70's during the day. That tells me birds will be moving north overnight on a southerly wind. It was great to be in the marsh early this morning. There were at least 5 Whip-poor-wills calling and while putting up the nets one zipped past me and landed within 20 feet and we were lucky to catch it in the net a little later.

We had 140 new banded birds and two recaptures including a Red-winged Blackbird and an Old Yeller--Yellow Warbler which is at least 2 years old and has made the trip from Central America and back a couple times at least! We heard or saw 15 species of warbler including: Blue-winged, Golden-winged, Nashville, Northern Parula, Yellow, Myrtle, Western Palm, Black-and-white, Prothonotary, Ovenbird, Northern Waterthrush, Common Yellowthroat, Hooded, and Yellow-breasted Chat. Seventy-nine species were observed in the marsh. There were tons of Blue Jays moving again today!

A close-up of one of the highlights today: (Nice looking female!) Just imagine this bird skulking in the underbrush and all you get is a glimpse of its head. 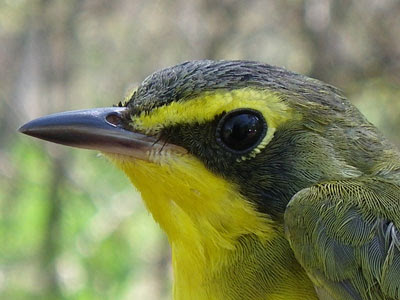 Females have gray crowns and males have black crowns. Males can have some gray on the head but the crown is black.

Another highlight of the day was this bird and you usually see it flying away if it flushes in front of you. So here is its tail for identification: 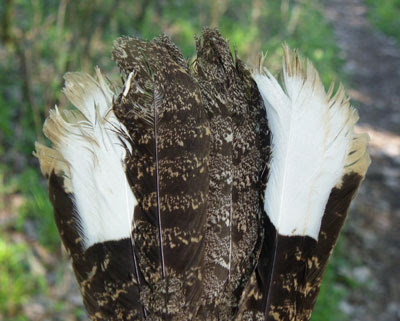 White tail spots versus tan tells you it is a male Whip-poor-will. Females have tan tail spots.

And here is a view that you may never get to see; the top of a Whip-poor-will's head. Such beautiful colored feathers and so camouflaged. It has long rictal bristles for assisting in capturing insects with its big mouth! 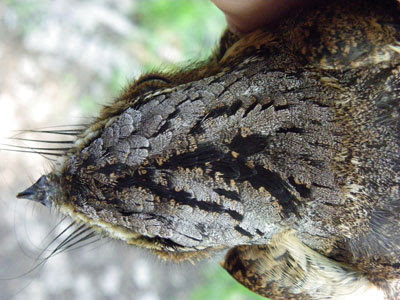 If you have the opportunity to get outside to go birding around dawn--say 6 a.m. or so--listen for the call of the Whip-poor-wills.

Whatever you do, I would try to get outside tomorrow; it should be a great day. Enjoy!