First day of the official spring migration season and what a day! I helped put up the nets and then left Mark and the crew to take over while Karen Mitchell and I took care of the Boy Scout Camporee out front of Davis Besse Power Station. A warm day for April with a strong WSW wind made for a good diversity of birds to show the scouts.

During net set-up Mark had a Chuck-will’s-widow fly in front of him while setting up the net. He went back later when it was light and got a good look at it with its reddish brown plumage. He said it was the biggest nightjar he had ever seen. One of the volunteers commented that it looked like a crow coming at her as it spooked when they were searching for where Mark had last seen it land to get a better look at it. I never got the opportunity to see the bird. There has been a lot of western and southern birds appearing in odd places. The winds have been strong from the west and that may be bringing them into Ohio. 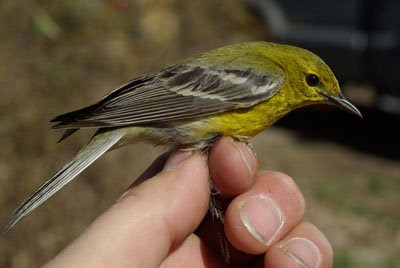 Enjoy early spring for Fox Sparrows are getting slim in numbers! They are moving north!
P.S. Quizbird is a male Pine Warbler considered an overflight warbler- overflying its normal breeding range.
Posted by BSBO Research Staff at 4:02 PM