Another southwest wind but stronger than yesterday. There were birds hopping, flying, and singing all over the place today. When the wind picked up to 30 mph it became hard to hear the songs and once again the efficiency of the nets was lower because of the wind.

A Kentucky Warbler was the highlight overflight warbler. Gray-cheeked Thrushes appeared today. Their cousin the Swainson’s Thrush tried to vie for the lead thrush today which they won over the Hermit Thrush numbers. Other highlights were another American Tree Sparrow still around and a favorite, the Chestnut-sided Warbler.

One hundred seventy-three species with 10 recaptures were netted involving 35 species. Fourteen warbler species banded with an additional 3 species heard or seen on the beach ridge. Ninety-two species were observed in the Navarre Marsh.

After a busy day of six hours of netting we began training a new set of volunteers to assist with the project. Besides new volunteer training, we also have a workshop to review project procedures before the season starts with past volunteers. I call them seasoned volunteers! This gets everyone up to speed and ready for days like today.

Another prize today was a female Hooded Warbler. Notice how large her beak is compared to her head. This is a drastic difference from any other “yellow” warbler. 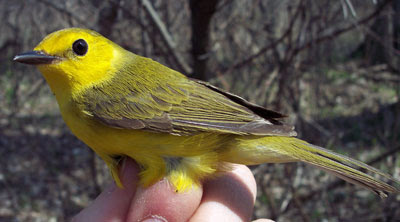 A Black-and-White Warbler is always nice to see. Here you can see that it looks mighty fine even with its retained primary coverts. The dull brown coverts tell us that it is a second-year bird—hatched last summer. 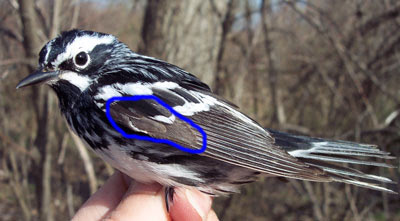