Southerly winds continue to bring in the birds...

Another southerly wind, not as strong as Saturday, produced a couple new birds for the season. An ornithology class from Wittenburg University visited the research site today and they got a treat of a Yellow-throated Vireo and a Worm-eating Warbler. We caught 2 Worm-eating Warblers along with two drab looking female Pine Warblers. Other highlights include 4 Hooded Warblers. Sixteen species of warbler were seen on the site with 14 species captured. 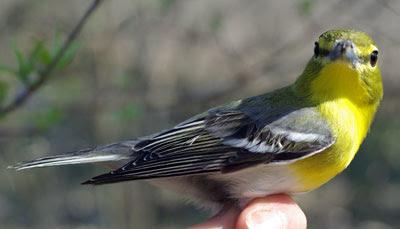 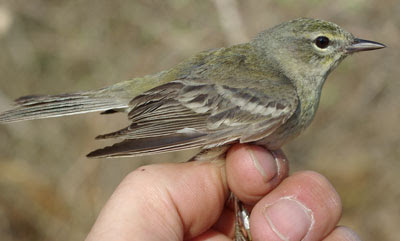 One hundred seventy-one birds were netted including 10 recaptures AND our first returning birds arrived back today! These were a Yellow Warbler which was banded last May as a Second-year male and a Gray Catbird banded in spring of 2007 as an adult. Returning birds are those previously banded at the Navarre site and return to the same site at some other year. The Yellow Warbler has made one successful migration to and from its wintering grounds. The Gray Catbird is at least 3 years old. Since it was banded as an adult we don’t know exactly how old it was at the time of banding. That is pretty cool to know these small birds travel all that distance and return to the same location year after year!

The Swainson’s Thrush has taken over as the dominant thrush. Hermit Thrushes are fewer in numbers than they were on Friday.

Tomorrow is forcasted for yet another Southwester, so we shall see what it produces. It has been a great variety the past couple days.