Twenty-two Warbler Species heard or seen in the Marsh

As I said every day should be good after the first wave and some days should be better? Well, this was a better day! One hundred ninety-seven new banded birds with 12 recaptures. The Yellow Warblers returned today! What I mean is, that quite a few returning (previously banded) birds returned to the site today. Twenty-two warblers were seen or heard at the site including: Blue-winged, Tennessee, Nashville, Northern Parula, Yellow, Chestnut-sided, Magnolia, Black-throated Blue, Myrtle, Black-throated Green, Blackburnian, Western Palm, Bay-breasted (Chipe de pecho Cantana), Blackpoll, Black-and-white, American Redstart, Prothonotary, Ovenbird, Northern Waterthrush, Common Yellowthroat, Hooded, and Wilson's. There was definitely more songs and more birds around than in previous days.
Male Blackpoll Warbler in alternate plumage. "Poll" means head, so black headed warbler=Blackpoll Warbler. 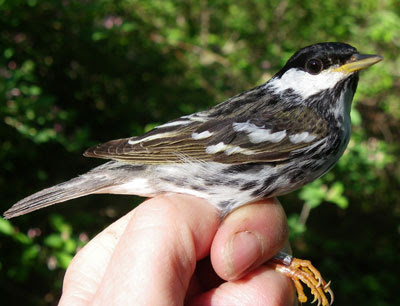 Top 7 species:
Yellow Warbler (YWAR)- 32
Myrtle Warbler (MYWA)-22
Gray Catbird (GRCA)-18
Nashville Warbler (NAWA)- 14
White-throated Sparrow (WTSP)-14
Magnolia Warbler (MAWA)-12
Western Palm Warbler (WPWA)- 10
Here is a top view of two of the four yellow-rumped species (MAWA and MYWA). Soon I hope they change the name of the Yellow-rumped back to Myrtle then there will be no confusion about the warblers with yellow rumps. 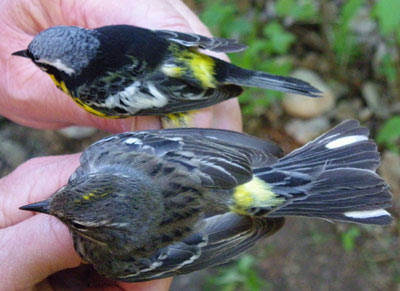 I am seeing some beautiful patterns from the topside of birds which most of us do not get the opportunity to observe. So I thought I would share some. Also this is the view most times an accipiter has when looking for prey. Some birds are more camouflaged than others from the topside. 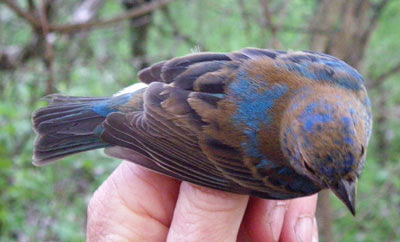 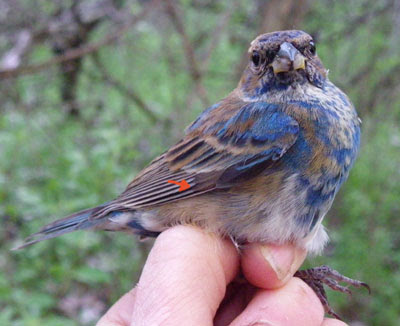 This is a bird hatched last year with its brown primary coverts showing at the red arrow.
The second best Eastern warbler in North America: 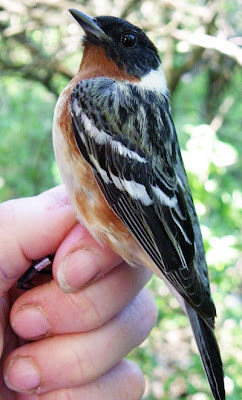 Tomorrow should be another good day! I believe once this cold front gets through this weekend and the wind turns around the volume of birds will be here. I could be wrong in my prediction but that is the gut feeling I have. I also keep wishing for a male Kirtland's Warbler and have not managed to catch one either. Enjoy the birds of spring!
Posted by BSBO Research Staff at 6:55 PM