South winds not producing much volume

A southerly wind today produced 24 species banded. There was not the volume we would have expected with this wind direction. I am thinking the Gulf of Mexico disaster is rippling among all the wildlife that has to pass through there and of course it IS affecting those animals less able to escape. Let us hope they can cap that pipe sooner rather than later. 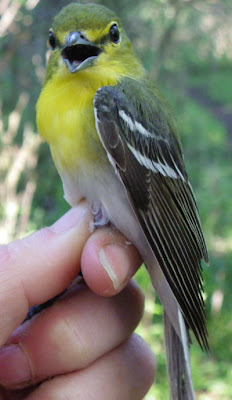 On a brighter note, we had some neat highlights for the day including a Yellow-throated Vireo and a strange looking male Red-winged Blackbird (Tordo Sargento). 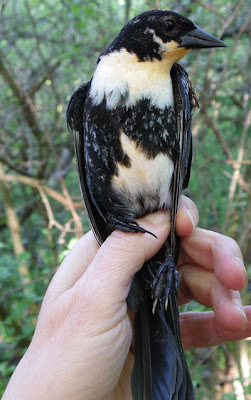 To prove it really is a Red-winged Blackbird, here is the dorsal side. Orange epaulets signify a second-year male-hatched last year. 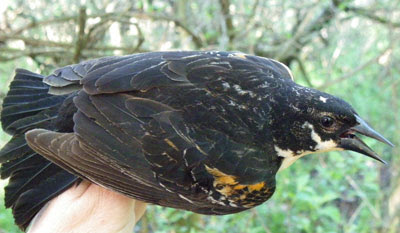 I am not sure what the field identification would have been for this bird. Obviously it has some molt issues. I first wanted to say it was a molting in white/peach feathers along certain feather tracts but that is not true either. I think it is a beautiful bird with the peach-white feathers. It looks like it is wearing a vest. I really wanted to put a radio transmitter on it to see whether it could attract a female looking like this and also what feather coat it would molt into during its next round of molt. They do not make radios that last that long...as far as I understand.

Seventy-eight new banded birds with four recaptures were the catch of the day. One of the recaptures was a Warbling Vireo banded in 2008. Those birds returning to the same area after a long journey truly amaze me!

We also caught a male Yellow Warbler (Chipe Amarillo) who appears to have just begun to molt into his basic plumage from his juvenile plumage and I mean juvenile plumage. The darker feathers are the feathers you would see on a bird fledging from the nest. Odd things can happen and apparently something halted this bird's molt. Here it is next to a full basic plumaged male. There is quite a difference. 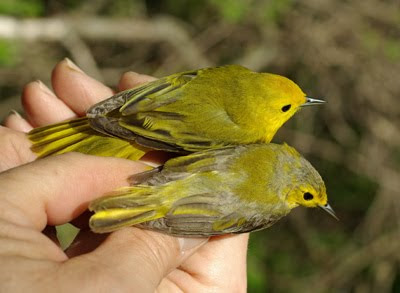 Here is the front of the bird. You can see that it has a freshly molted secondary contrasting with the remaining juvenile feathers. 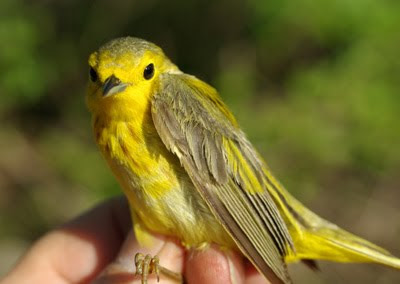