First Day of September was not so bad a day!

I have not differentiated our daily catch between the five beach nets and the 23 inside ridge nets since the numbers have not been anything to talk about. Today was the highest capture of the fall thus far with seventy-seven new birds and 11 recaptures. One of the recaptures was a Mourning Warbler from last week. It must not be in a hurry to head south.
Top 9 species:
Magnolia Warbler -11
Gray Catbird -10
Chestnut-sided Warbler – 8
Canada Warbler – 5
Mourning Warbler -5
Black-throated Blue Warbler – 4
Ovenbird – 4
Warbling Vireo - 4
Common Grackle – 4
The answer to the quiz bird with the white tail band was a Magnolia Warbler on August 25th. Here is a female Canada Warbler. The breast markings are a gray necklace instead of dark black necklace for an adult male or the dark gray necklace with some black beads mixed in. 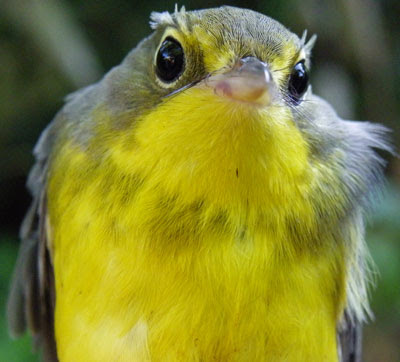 Not bad looking for a female. It looks like it could be a contestant for the mad bluebird picture you see many places. The tuft of feathers above the eyes make the bird look angry. There is always something in nature to make you smile. Enjoy!