The morning started out in a whirlwind, the southeast winds apparently brought in some birds overnight. A Rose-breasted Grosbeak and a Baltimore Oriole serenaded us after we had the nets up. No luck in seeing them up close today. Opportunities will come later I am sure for a better view. They have only just begun to appear. At least for today the numbers of Myrtle Warblers were considerably lower and will not make the top ten species banded.
A very nice selection of birds today with 29 new banded species and another 3 recaptures species, Carolina Wren, Kentucky Warbler and Worm-eating Warbler. First day of the year for us to have White-crowned Sparrow, Least Flycatcher and a gorgeous male Black-throated Blue Warbler at Navarre.
Thirteen species of warbler were caught today, two of those were recaptures. One hundred and thirty–seven new birds banded today with 28 recaptures in 6.25 hours. There was still a Winter Wren that graced us with its presence. It is one of the last we will see until fall migration.
We caught all the thrushes today except the Eastern Bluebird, and Gray-cheeked Thrush. A lot of Wood Thrushes were around the station today.
Tomorrow looks to be a good day for a good movement of birds. The scattered showers predicted and the warm winds should make the birds easier to see, so get out if you can!
Most likely going to be a second push of the first wave birds such as Myrtle Warblers, Hermit Thrushes, Ruby-crowned Kinglets and some second wave birds heading in.
Top 7 Species Banded:
White-throated Sparrow - 24
Ruby-crowned Kinglet - 21
Ovenbird - 9
Nashville Warbler - 8
Hermit Thrush - 8
Yellow Warbler - 7
Gray Catbird - 7 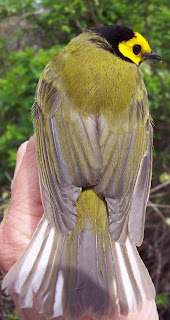 Highlights were a male Hooded Warbler, see above, Black-throated Blue Warbler, see below, and another Sharp-shinned Hawk. 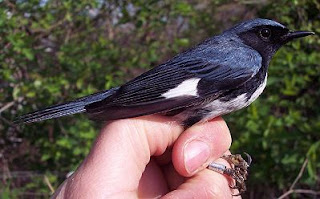 A Nice after-second year male Black-throated Blue Warbler (primary coverts are black not edged with green as a Second-year bird would have) This bird is at least 3 years old.

Enjoy Spring, it only comes but once a year!