White-throated Sparrows, Myrtle Warblers, Hermit Thrushes, and kinglets made their way to NW Ohio over the weekend in increasing numbers. According to some of our volunteers, last Friday the winds turned to the NW and made for a good fallout of migrants in Toledo area backyards. The migrant traps along the lake shore were good as well. Several Red-breasted Nuthatches (RBNU) were observed. Below is a female, identified by her gray cap. 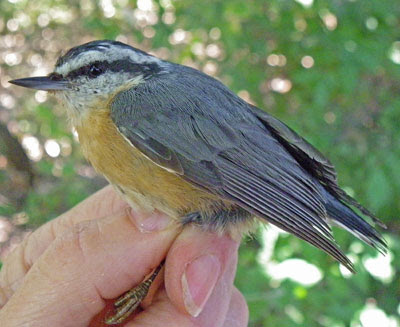 Warbler species the past week totaled 19 species including Tennessee, Orange-crown, Nashville, Northern Parula, Chestnut-sided, Magnolia, Cape May, Black-throated Blue, Myrtle, Black-throated Green, Bay-breasted, Blackpoll, Black-and-white, American Redstart, Ovenbird, Northern Waterthrush, Mourning, Common Yellowthroat, and Wilson's.
This has been a great fall season in terms of numbers of birds banded. The Navarre station has seen more than twice the number of birds banded inthe entire fall 2009 season, and in the past decade, only 2001 has been greater at this stage of the migration. We'll discuss the particulars of migration and how it compares in a future post.
Highlights for the week included these attractive Rose-breasted Grosbeaks (RBGR). In basic plumage, one of the ways to differentiate sex in RBGR's is the color of their ventral-wing coverts as seen here.

Females have yellowish wing linings while males are reddish.
The adult male (shown below) can be distinguished from young of the year males and all females by its black wings, including black primary coverts. 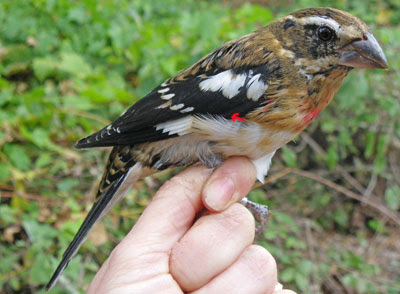 Banding provides valuable information on migrational timing and individual condition of migratory birds. It also provides opportunities to observe multiple species up close for comparison such as the four brown thrushes pictured below:

And here is the front view, (left to right) Veery, Gray-cheeked, Swainson's, Hermit:

Note the clarity of spotting on the breasts of these birds. The Veery has blurry spots which is an added field characteristic to look for.

With cold fronts forecast for this week expect to see Hermit Thrushes, White-throated Sparrows, Myrtle Warblers, and kinglets to arrive in the region in full force; maybe our first Rusty Blackbirds and Fox Sparrow as well. The last week of September and the first 10 days of October can hold the best diversity of the fall migration. As the leaves change, enjoy the changes of songbird migration as well.
Posted by BSBO Research Staff at 4:14 PM No comments:

Posted by Julie Shieldcastle, Navarre Songbird Migration Station Supervisor:
This was a week of ups and downs for bird numbers with little fluctuation in temperature and humidity. It looks like this weekend could be a great time to go birding with the impending front that is coming through tomorrow (Sept. 3rd).

The past four days we saw or heard 17 species warblers with a total of 20 warbler species for the season. The 17 warblers include Tennessee, Nashville, Chestnut-sided, Magnolia, Cape May, Black-throated Blue, Black-throated Green, Bay-breasted, Blackpoll, Black-and-white, American Redstart, Ovenbird, Northern Waterthrush, Connecticut, Common Yellowthroat, Wilson’s, and Canada. We did not see or hear a Yellow, Mourning, or Prothonotary Warbler this week.

This season (to date) we have banded as many Black-and-white Warblers (13) as our total for last fall. Six were captured today (Sept. 2). This gives me an opportunity to show you both hatching year and adult (after hatching year) Black-and-whites (BAWW). Note the adult male has a black cheek (auricular) patch. Streaks on flanks are very black and distinct.

Here is another nice bird for the week: 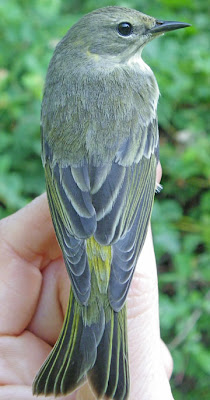 A nice back shot showing you that it is one of the warblers with a yellow rump. This is a quiz bird.

Another warbler to be familiar with is this Bay-breasted Warbler (BBWA) with its lemon green head and back with little to no dark streaks and whitish throat and breast. The gray legs and feet help identify this as a BBWA from its cousin the Blackpoll Warbler. 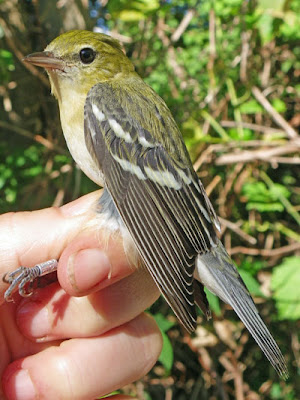 Fall migration of Ruby-throated Hummingbirds has been sporadic in Navarre but five new birds were banded this week. Here is a hatching year male with its throat streaked with iridescent feathers. You can see the remnants of his yellow fleshy gape of its nestling stage. 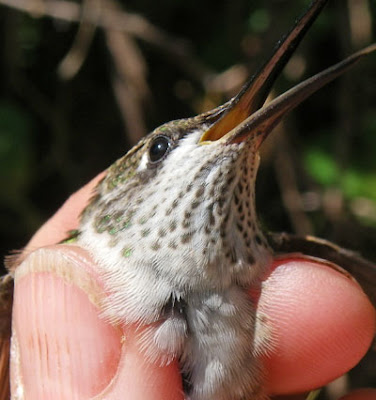 A nice surprise on Wednesday, 09/01, was this Philadelphia Vireo (PHVI) 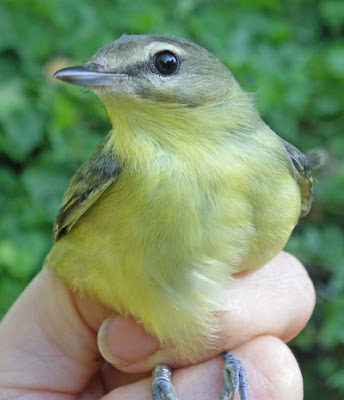 Its bright yellow throat and breast separate it from its cousin the Warbling Vireo. 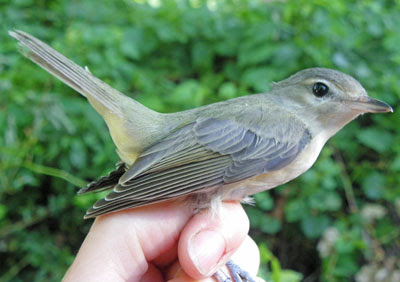 All vireos have blue-gray legs and thick bills with a slight hook at the end.

Here is the side view of the quiz bird: Note the thin beak in comparison to the small rounded head. Some use the yellow patch in the auricular and nape regions to assist in identification. However, it is not always apparent on a fall-plumaged bird. The bill shape versus the head and the streaks on the breast are the give aways for me. This is one of the warblers with yellow rumps, along with Magnolia, Palm, and Myrtle (the one people call the Yellow-rumped).

Answer to Bird Quiz is an adult female Cape May Warbler (CMWA). She has a faint remnant of the cheek patch (auricular) that the male exhibits in the spring. The fine streaking on the breast is a common characteristic for CMWAs. While the one in the photo above is a paler example, female CMWAs have two wing bars. A male has only one.

Be sure to stop by the Observatory this weekend (at the entrance to Magee Marsh) to see what warblers and other migrants are visiting the waterfall at our window on wildlife. For hours of operation and area birding and travel information visit BSBO HERE. Have a great birding weekend!
Posted by BSBO Research Staff at 7:24 PM No comments: