We dodged the rain for a couple of hours...

I did say it would be a good day even though you had to dodge raindrops! There was a good variety of birds around which should have made everyone happy. We dodged the rain for a couple hours but heavy drizzle made us close up shop early. We did get in 5.33 hours capturing 289 new birds and 13 recaptures. Remember how much I said I loved White-throated Sparrows because we had sooo many. Today it was Gray Catbirds. They are so quiet—not! At least they don’t bite hard. We again caught the Common Yellowthroat return from 2001. I imagine he is on territory and will be around for the duration of the breeding season. Another old banded COYE was captured that was banded in 2004. Today we were graced with 45 bird species banded including 23 warblers. It was neat to see one net with a Wilson’s, Hooded, and Kentucky Warbler lined up next to each other in the net. Black and yellow colors prevailed today! The Magnolia Warblers are here! Did I not say they would come today?!

Highlights for the day were the first Black-billed Cuckoo for the season, 3 species of Empidonax flycatchers (Least, Yellow-bellied, Traill’s), Kentucky (female), my first Wilson’s of the year!, Hooded (female), male Mourning—I heard there were many on the Magee Boardwalk, and a female Scarlet Tanager. 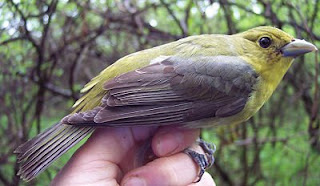 Female Scarlet Tanager has a green yellow color versus the female Summer Tanager is a golden yellow coloration. The definitive way to tell is to look at the under wing lining color or axillary color---for Scarlet it is white or gray and the Summer female axillaries are yellow. 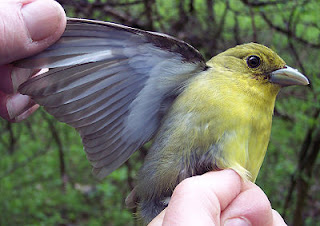 So as you can see it is a great time to get outside and enjoy Spring!