A very beautiful day to be outside...

There was relatively no wind today. The Davis Besse steam stack was going straight up when we arrived to put the nets up. A very beautiful day to be outside! A light southerly breeze as we left the marsh after a little over seven hours of nets open. Today produced 156 new banded birds with 45 recaptures. We have caught a foreign Magnolia Warbler. From the band series it is one that has been put on this year. We have the same band series for this year. That is why I am certain that it is not an “old” banded bird. Most likely it will not be in the Bird Banding Lab computer since it is a recent banding. Eighteen species of warblers captured with 21 species seen. 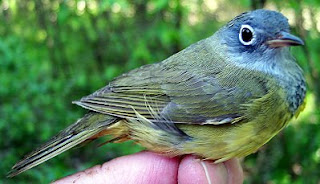 Connecticut Warbler
Highlights for the day were another Northern Parula which is a total of 20 for the spring which is the highest number we have ever caught in a spring season, Connecticut Warbler, and a Philadelphia Vireo. More Red-eyed Vireos, Canada Warblers, and American Redstarts are showing up which indicates the third wave is about to peak.

A couple attractive female warblers who do not always get a second look: 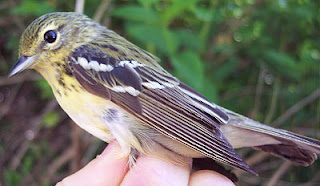 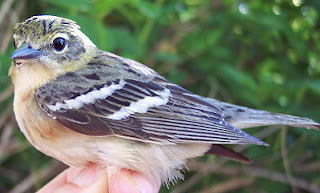 Hope you all get outside tomorrow!