Red-breasted Grosbeaks have made an appearance...

Winds out of the south bought in new birds for the day. It turned out to be the beginning of the second pulse of birds of the first wave. Tomorrow looks to be even better from the forecast with southwest winds this evening and lows in the high 50’s to maybe 60 degrees. Scattered downpours shut down our banding operation a bit early for the day. We had many White-throated Sparrows and Gray Catbirds. Some second wave birds, Baltimore Orioles and Rose-breasted Grosbeaks have made an appearance. There will be more to come in the second wave which is around the 7th to the 15th of May. Be on the look out for southwest winds and the low pressure cell in the Oklahoma/Arkansas region. This weather pattern brings warm tropical winds up to the Ohio Valley. The waves have been on schedule so far this spring.
One hundred seventy new birds were banded including 32 species. Eighty-nine birds species were heard and/or seen at the station today. Sixteen recaptures for the day with two old Common Yellowthroats and an old Yellow Warbler. Of the Common Yellowthroats, one was banded last year and the other was banded in 2001!
Again lots of Blue Jays flying before the rain came. They maintained their uncertain direction of flight again ---flying east to then fly back west along the lakefront. They don’t appear to want to cross the lake at the Navarre point along the lake.
Highlights for the day were the 15 species of warblers including several Blue-winged Warblers and a recaptured Hooded Warbler from yesterday. Also an interesting catch not unusual but usually stumps most people so here you go give it a shot—what is this? (answer at the end of the day’s blog) 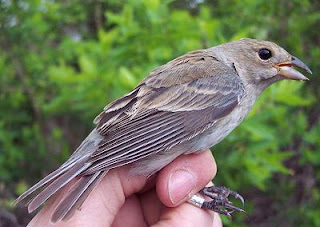 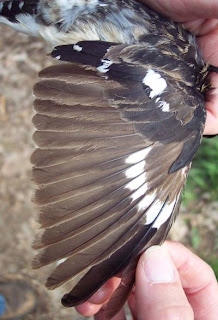 Answer to the mystery bird is female Indigo Bunting! Notice the thicker bi-color bill with some blue on the rump.