At some point last night the wind shifted out of the southwest for a bit. However, by this morning it was northwest. Regardless, the Marsh Region is still jumping with birds. We had the pleasure of having Keith Lott, ODOW Wind Energy Wildlife Biologist, visit the banding station. With him there, it further supported the fact that there are tons of birds here in the Lake Erie Marsh Region on the 20th of May. This to me was important because the draft of the bird and bat monitoring for the Ohio Division of Wildlife, Terrestrial Wind Development Voluntary Cooperative Agreement only had bird surveys for migration running through May 15th. I have received word that the dates have been extended on the migration surveys.

For the seven hours the nets were up we caught 331 new birds and 44 recaptures. The birds never slowed down today but we did. Forty-one species including 21 warbler species were today’s catch. Highlights for the day were Red-breasted Nuthatch, Ruby-crowned Kinglet (there was still one around), Philadelphia Vireo, two male Blackburnian Warblers!, and a female Hooded Warbler. A large swallow movement occurred today which lasted until after 1000 with swarms of Purple Martins, Barn Swallows, Bank Swallows, and Tree Swallows. I imagine there was some Northern Rough-winged Swallows there as well but not while I was observing.

Finally the Swainson’s Thrushes began showing up. Some years they do not arrive in any numbers until around the 20th. I admit I was wondering if they were going to appear in any numbers. Can you believe spring migration is half over! Get out while the birds are here! Who needs to mow their grass? It will still be there. The birds won’t be back until fall. 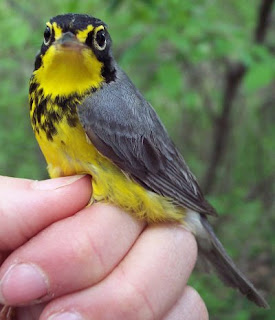 Canada Warbler with his black necklace. 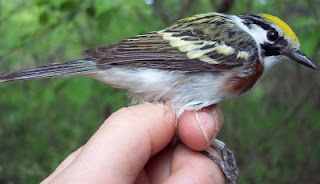