As predicted the weatherperson did get it right today! We should give them a bonus. The winds were out of the southwest and it did pour early this morning delaying the opening of nets. Regardless of the rain we ran the nets for seven hours to capture our season record of 396 new birds and 25 recaptures. We caught one banded Myrtle Warbler and that was it for the Myrtle Warbler representatives today. Thirty-seven species were banded today including 15 warbler species. Twenty-one species of warbler were heard or seen on the site for the day. The southwest winds did bring in the third wave of birds-just look at the top species and that will define it: flycatchers and vireos.

We had visitors from Mexico with Jill and Dave Russell. They always pick a good day to visit the station. They were awed by the Indigo Buntings because they never get to see them in their breeding or alternate plumage. 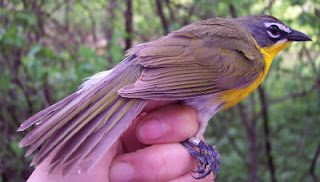 Highlights for the day include 4 Connecticut Warblers, 4 Philadelphia Vireos, Traill’s Flycatchers!, 4 Acadian Flycatchers, Mourning Warblers, White-eyed Vireo, Yellow-breasted Chat, and a Black-billed Cuckoo. Tomorrow should be good even though the winds are to shift by early morning to the northwest. We will probably catch a lot of banded Traill’s flycatchers and some of the other neat birds too, I am sure.
We caught 3 female Connecticut Warblers and one male. Here is one of the females. She has a brown head with a bold eye ring. 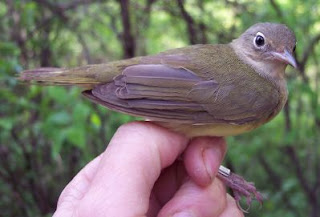 Hope you are enjoying spring!
Get out before it is gone!