Another beautiful day in the marsh, southwest winds brought in a few more species but not a lot of volume yet. The next few days look a little wet and winds will turn to the northeast so the birds will not be going north until the wind turns around. Total new banded birds for the day was 230 including 47 species and 16 recaptures. More old Gray Catbirds returning today. Twenty-two species of warbler were captured with 26 species seen/heard in Navarre. It seemed like an exceptional early day for catching over a dozen American Redstarts.
Highlights for the day were Ruby-throated Hummingbird, Hairy Woodpecker, Gambel’s White-crowned Sparrow, Mourning Warbler, Kentucky Warbler, Prothonotary Warbler, 5 Northern Parula, Hooded Warbler, Bay-breasted Warbler, and Yellow-breasted Chat. 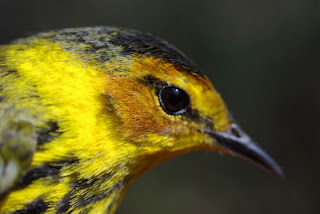 Beautiful head of the male Cape May Warbler

There is always something to enjoy in nature.