Today's efforts were split between the North Coast Nature Festival in North Olmsted and Navarre Marsh. Julie West and I conducted an educational banding demonstration at the Rocky River Nature Center. We had a good day of 59 new banded birds and 4 previously banded Downy Woodpeckers. Three of them were banded last year at festival time and one was two years ago at this time. The highlight in my opinion were the two Northern Rough-winged Swallows. They had been swooping around overhead the day before and today. They were caught in the mist nets by the river near the feeders. We also had great comparisons for Hairy and Downy Woodpeckers since we caught both at the same time. 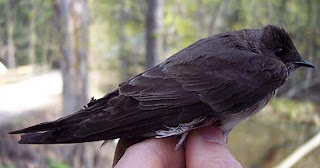 Northern Rough-winged Swallow
As far as Navarre, it too had a terrific day to follow yesterday’s great day. Not as much species diversity but numbers were 287 new banded birds and 16 recaptures in 7 hours of net operation. Thankfully the winds held out and the banded White-throated Sparrows left the ridge.
Nine species of warblers were caught today which are included in the 26 species banded. Three species of vireos made an appearance; White-eyed, Blue-headed, and Red-eyed.
A returning Common Yellowthroat was captured today. It looks like it was a bird banded from last year. It made a return appearance to the banding station. 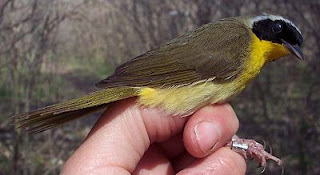 Common Yellowthroats nest in the marsh and we do catch a dozen or so returning in the spring. The miles these birds travel is amazing to me! 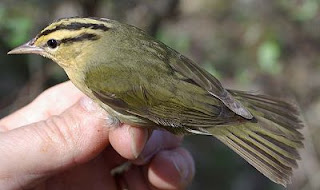 One of our recaptures was a Worm-eating Warbler caught yesterday. 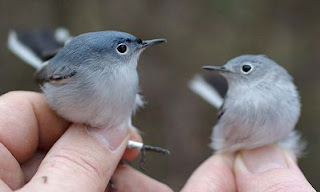 A pair of Blue-gray Gnatcatchers The male has the black line (supercilium) above the eye.

Spring is such a fascinating time of year!
Enjoy!