A GREAT Day for early songbird migration! The warm front went through early this morning turning the winds from the south. White-throated Sparrows were singing loudly at sunrise. Blue Jays were migrating early afternoon today in large flocks. They are a great example of birds not willing to cross large bodies of water. They flew east down the ridge hit the lake and then flew back to the west again. Hawks were buzzing around every once in a while scaring the Red-wings and Tree Swallows as evidenced by their alarm calls.
A total of 195 new birds with 10 recaptures for the day in 5.75 hours. Eighteen species of birds were banded with the highlights being a male Whip-poor-will and two Blue-headed Vireos.
The banding station was visited by a group of women from the First Energy Women in Nuclear (FEWIN) organization. They were very enthusiastic about what the beach ridge and marsh property held for birds in the region during migration.
Top 8 species for the day are:
White-throated Sparrow - 80
Myrtle (Yellow-rumped) Warbler - 59
Western Palm Warbler - 13
Hermit Thrush - 9
Ruby-crowned Kinglet - 7
Swamp Sparrow -5
Black-throated Green Warbler - 4
Northern Waterthrush - 4 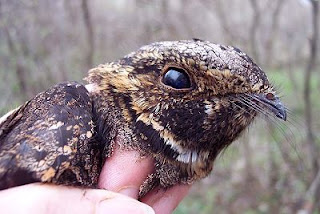 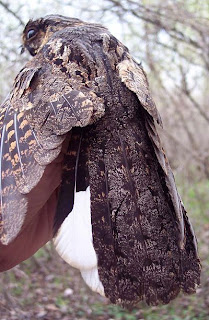 Cryptic coloration of the Whip-poor-will Note the long rictal bristles (whiskers) and large fleshy mouth to gather insects in flight at night. The male has white outer tail spots and the female has tan outer tail spots. 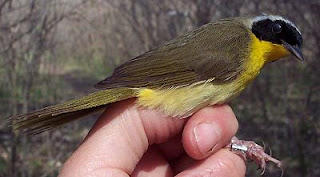