April As I had thought it would be, today was a slow day with the wind out of the north and east. 41 birds were captured in the mist nets. The cooler temperatures most likely pushed the birds that were here a little further inland for a day or two.

Thirty new banded birds and 11 recaptures were handled today. One of the recaptures was an old Song Sparrow. The Song Sparrow was banded on April 12, 2002 as an adult bird, therefore it is at least seven years old!

It was a banner day for Northern Cardinals capturing 5 new ones and two banded ones. Their big orange beaks tried all they could to draw red blood! Western Palm Warbler was the only warbler caught. Myrtle Warblers were heard and seen but not captured in the nets. This further supports the importance of multi-layers of data collection. Point count and bird list are the other layers to compliment the banding data.
Top six species for the day were:
White-throated Sparrow - 6
Northern Cardinal - 5
Hermit Thrush - 3
Winter Wren - 3
Ruby-crowned Kinglet - 3
Red-winged Blackbird - 3
Highlights for the day were a male Sharp-shinned Hawk and Eastern Towhee. 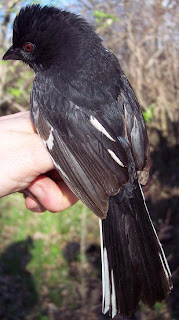 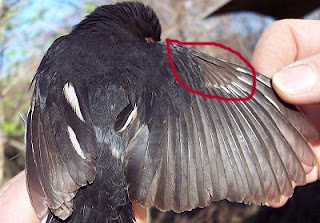 This Eastern Towhee was an SY-Second Year Male - note the brown abraded primary coverts. The eye color was an orange-red color as opposed to the adult males which would have a ruby red eye color. 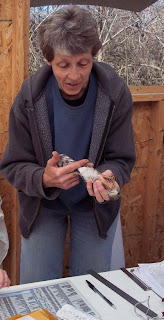