It is the end of migration...

The day started off really foggy but was better than the forecast just ten miles south of here which had thunderstorms and lightening. You could tell where the warm front was located. Light east winds in the morning turned southwesterly by afternoon. When the winds shift to the south I do not get excited because the number of birds are telling me it is the end of another migration season. Today we beat yesterday’s total by 2 with 23 new birds and 11 recaptures. Thirteen species were captured today including six warblers. Seven warblers were seen or heard at the site. The only warbler added that we did not catch was Common Yellowthroat. We are catching many Gray Catbirds, Yellow Warblers, and Common Yellowthroat females with brood patches which is another sign spring migration is over. We have caught at least two female Prothonotary Warblers with brood patches also. It is great to have Prothonotary Warblers around! Such a treat to see the touch of the sun with its white tail rays flying around the marsh. 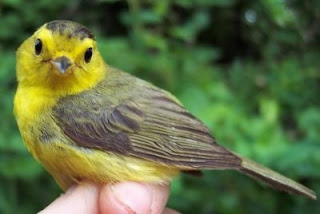 There are still some female migrants around including Wilson’s Warbler and a male Mourning Warbler was still singing on site too!

Highlights also include a Gray-cheeked Thrush and a Wood Thrush banded today.

So far I have not heard or seen where the Swainson’s Thrushes or Red-eyed Vireos have gone. They must have gone around us. Powdermill banding station in PA has had normal numbers of birds. I am still investigating where across the eastern US they made their travels north. 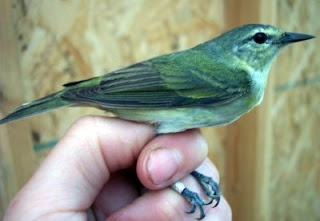 Here is a mystery bird we caught today for you to work on! As I have said before there is never a boring moment to be found in nature!