The last day of the official season and it was a great ending. See what you think: While putting up the nets, an Eastern Screech Owl flew into the net. Other highlights included the elusive Yellow-billed Cuckoo and another American Woodcock! We also captured a Black and White Warbler female with a brood patch. We have had a pair Black and White Warblers nesting on the ridge most years. For 5.5 hours of net operation we captured 18 new birds and 15 recaptures which included 12 species of birds. 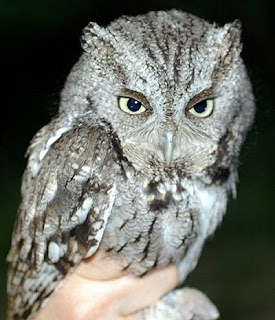 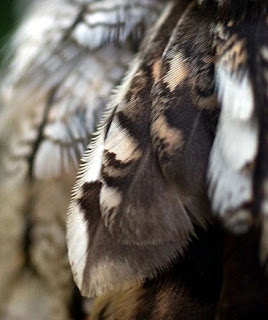 This feather adaptation allows for the birds
to fly silent at night. 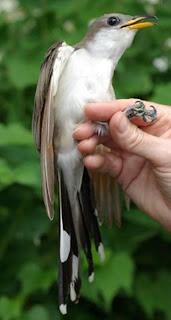 Cuckoos are late spring migrants. Enjoy this Yellow-billed Cuckoo! Remember the wings on the YBCU are rusty colored contrasting with its gray back. This characteristic makes for easy ID when the bird is flying.

Have a great summer and if I have any news about summer banding I will post it here. Take time to help with the Ohio Breeding Bird Atlas if you have not put in some time. It is a worthwhile project.

Bone up on your fall warblers they will be here sooner than later.