Connecticut Warbler and other fall migrants

If you were not able to get out much during the month of August, some of the early migrants are still hanging on including Baltimore Orioles, Yellow-bellied Flycatchers, Canada Warbler, and Prothonotary Warbler. The Navarre Banding station continues to hold at 20 species of warbler for the fall season, a pretty good tally for this early in the season. We are still awaiting Northern Parula (NOPA), Orange-crowned Warbler (OCWA), Western Palm Warbler (WPWA), Blackburnian Warbler, and Myrtle Warbler (MYWA).
Here is a quiz bird (profile and front photo) to sharpen your fall warbler ID skills: 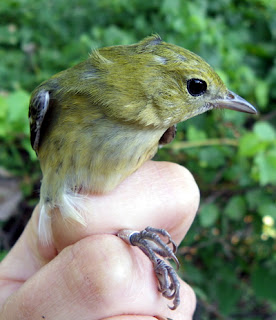 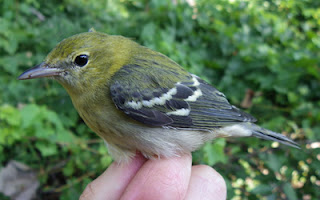 An early and a late migrating flycatcher pair graced us with their presence, on September 4th. Actually, there is a dispersal of Eastern Phoebes shortly after fledging to the beach ridges along Lake Erie. Where they originate isn't known but the behavior results in strange migrational timing for the species as it may be seen from August to November.

The Eastern Phoebe (EAPH) and Eastern Wood Pewee (EAWP) are pictured below from left to right. The EAPH has a dark head and a dark bill (both upper and lower mandibles (bill) are black). Whereas the EAWP has a bi-colored beak (top mandible is dark and lower mandible is yellowish or lighter color) in the fall. Neither has an eye ring which separates them from the other Empidonax flycatchers.
Here we share with you an uncommon warbler for any season, the Connecticut (CONW). This individual is one of two we have caught so far this fall. It is a hatching year bird with a buffy eye ring. An adult male would be just as you would imagine with their slate-colored head and bright white eye ring.
﻿﻿﻿ ﻿﻿﻿﻿﻿ ﻿﻿
Enjoy the early days of September, more birds are to come in the following weeks. Watch for cold fronts from the north and northwest. If you can identify these confusing warblers in the fall season, you are certain to be an expert by spring. Remember Saturday, September 10th at 10 AM is the Free Public banding demonstration at the Black Swamp Bird Observatory. For more information on all the fall happenings at BSBO, visit our website at: http://www.bsbobird.org/   and Kenn Kaufman's Best Bets for Birding at www.bsbobird.org/birding