With the passing of the month of August, many consider the start of fall passerine migration just around the corner, but in fact it is already here. Prothonotary, Canada, and Yellow Warblers have begun their trek south with flycatchers following their lead. American Goldfinch and Cedar Waxwing are finishing up their nesting duties as well. At Oak Openings, we had an American Goldfinch nest with 3 eggs and two pink nestlings on August 4th. It demonstrates that not all birds are done nesting by the end of July. Some wait until later in the summer to even begin. Something to keep in mind when the urge to manicure and mow fields and hedgerows before the end of August manifest itself. 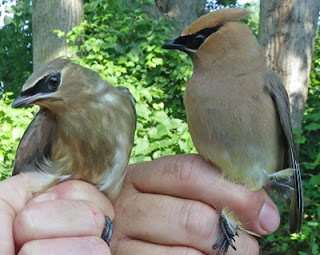 Here are examples of Hatching Year birds-note the eye color on the Brown Thrasher (BRTH) and the difference in the juvenile plumage of the Cedar Waxwing, left, (CEDW) and the adult CEDW. 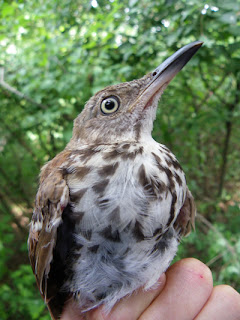 The Prothonotary Warbler below (PROW) will not be around these parts for long, so get out and enjoy this bird with fanfair or fantail. We refer to it as  a touch of the sun with its golden body plumage. 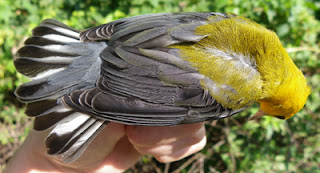 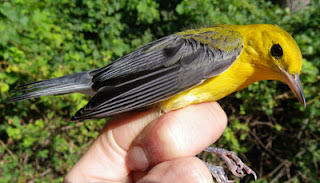 This week we have racked up 20 species of warbler, if that is not enough to get you outside we do not know what is. The species captured so far are Tennessee, Cape May, Nashville, Yellow, Chestnut-sided, Magnolia, Black-throated Blue, Black-throated Green, Black-and-white, Bay-breasted, Blackpoll, American Redstart, Pronthonotary, Ovenbird, Northern Waterthrush, Mourning, Connecticut, Common Yellowthroat, Wilson, and Canada Warblers. Not a bad list for August!
Let us throw in a few quizbird photos: 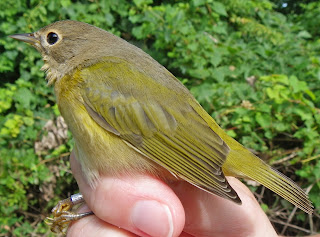 Note the buffy eye ring which helps with aging it as a Hatching Year (HY) bird.

Take a look at this Black and White Warbler and age and sex the bird: (Hint-red arrow helps in pointing out the primary coverts to assist in aging) 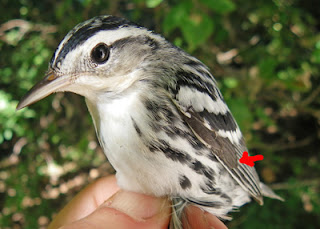 (This is a Hatching Year Male BAWW- brownish coverts confirm HY as well as the distinct black streaks on the side tell you it is a male (HY). Females have blurry black streaks on flanks. Adult male BAWW would have the black facial patch.)

To prepare you for fall warblers here are some previews for the birds to come:

﻿﻿
﻿Why not have another row of Quizbirds? Front and back views to give you a better size comparison. 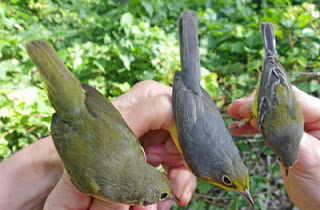 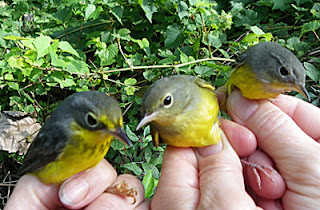 To help you refresh your fall warbler ID, join us for our public banding demonstrations. The first one is Saturday September 10th at 10 AM -11 AM at the BSBO office. Hope you can join us!
Answer to quizbird #1: Nashville Warbler (NAWA)-eye ring not wing bars or tail or breast spots or streaks.
Answer to the quizbird lineup: from left to right front view-Canada, Mourning, and Magnolia Warblers.
Posted by BSBO Research Staff at 8:29 AM