Spectacular Sparrows for the First Half of October

October is the month for sparrows as they begin invading the marsh as a part of their annual southerly trek. The week has tallied ten species of sparrows including Eastern Towhee (EATO), Chipping (CHSP), Field (FISP), Fox (FOSP), Song (SOSP), Swamp (SWSP), Lincoln (LISP), White-throated (WTSP), White-crowned (ECSP), and Dark-eyed Junco (SCJO). This week the Song Sparrows  arrived in good numbers while White-throated Sparrow numbers continue to build. When looking at sparrows, certain field marks are important to observe such as head pattern, length of tail, streaked or plain breast, etc.

Here are four species we captured at once: 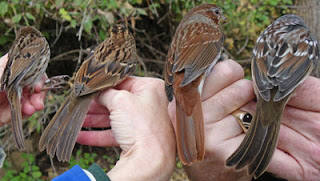 Left to right: SOSP, WTSP, FOSP, WCSP
Here's a tricky sparrow to ID in the fall.
We'll make it a quiz bird and see if you can work it out: 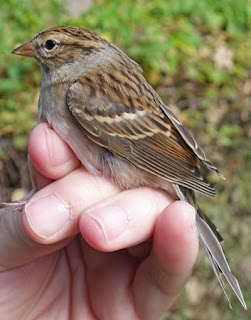 Can you resist the urge to scroll down right now for the answer?!

And here we have the first for this fall season, and the official BSBO Bird of Winter, the American Tree Sparrow (ATSP.

We usually do not see or band an ATSP until late October or early November. It's a beautiful sparrow with its bi-colored beak and breast spot.

Here are a few highlights from the past week: 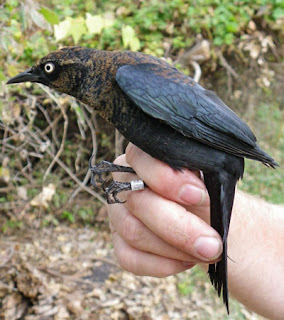 This is a male Rusty Blackbird (RUBL) with its rusty-edged iridescent plumage. By spring it will have worn off the brown edgings and will be sporting a sleek iridescent plumage. RUBLs are similar in size to Red-winged Blackbirds and have a yellow eye.
We've banded quite a few American Woodcocks (AMWOs) this fall, with major flights in late September and again the past couple of days. This one decided to show us its flexible bill which is used for probing the soil and grabbing worms and invertebrates. 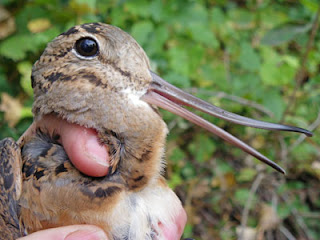 Isn't that just the coolest thing?!
The AMWO has eyes positioned close to the top of the head allowing it  to watch for predators while foraging for invertebrates.
And finally, our quiz bird is an
immature Chipping Sparrow (CHSP). 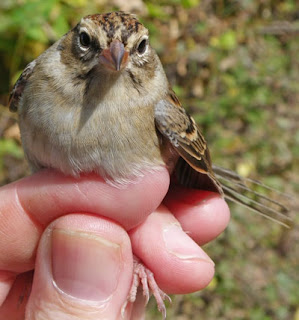 The bill will darken and the black eyeline will become more distinct. While immature sparrows are not easy, some give a hint of their adult plumage.
There aren't likely to be many more pleasant fall days left, so we encourage you to get out as much as possible and enjoy all the wonderful fall migrants.

We'd also like to take this opportunity to congratulate the Observatory's Ohio Young Birders Club!  Thanks to the generous contributions of people from all over the country, the students raised more than $3100 during their Big Sit fundraiser on October 10th.  Many thanks to the Ottawa National Wildlife Refuge for allowing us to place the count circle alongside the Auto Tour route. This wonderful spot helped the team tally 62 species in 9 hours of effort!  Half the proceeds will support the club's activities for 2011 and the students will donate the other half to the Lake Erie Islands Chapter of the Black Swamp Conservancy for restoration of habitat on Middle Bass Island.
Posted by BSBO Research Staff at 9:01 PM