This may be the last week for a large diversity of warblers along Ohio's north coast. Two strong cold fronts moved through the latter part of the past week which has apparantly sent many of the warbler species on their southerly way. Twenty warbler species were seen during the week including Tennessee, Orange-crowned, Nashville, Northern Parula, Chestnut-sided, Magnolia, Cape May, Black-throated Blue, Myrtle, Black-throated Green, Blackburnian, Pine, Western Palm, Bay-breasted, Blackpoll, Black-and-white, American Redstart, Ovenbird, Common Yellowthroat, and Wilson's. 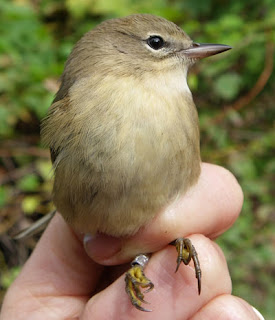 Highlights for the week were this Pine Warbler (PIWA), that we shared as a quiz bird on the BSBO Facebook Fan page, Yellow-bellied Sapsuckers, our second Purple Finch of the season, and a bird that gets everyone's heart pumping when we find it in the net.... 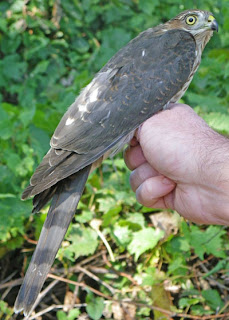 A gorgeous Sharp-shinned Hawk!
Another major highlight was a Philadelphia Vireo (PHVI) with a band issued to another bander on it! This is what we call a foreign recovery. We have submitted the data to the Report a Band website, however, the data has not been received by the national computerized database from the bander yet. It was a shiny band, looking like it had been put on quite recently. This is one of the exciting parts of banding birds; an opportunity to trace a bird's migratory pathway, or at least a segment of it, adding valuable bits of migrational information about these feathered wonders. We will wait with anticipation for the origin of this PHVI and hope that another bander south of here has the great fortune of catching it again.
Bird speciation is turning over to the "October" dominants of Hermit Thrushes (HETH), White-throated Sparrows (WTSP), Kinglets (GCKI & RCKI), and Myrtle Warblers (MYWA). These will be replacing the late September leaders of Swainson's Thrush (SWTH), Gray-cheeked Thrush (GCTH), and Blackpoll Warbler (BLPW). Also, expect increases in Brown Creepers (BRCR), Winter Wren (WIWR), and a variety of sparrows.
Our first White-crowned Sparrows (WCSP) appeared this week. One of each age class:  a hatching year (HY) individual with its two-tone brown striped head. 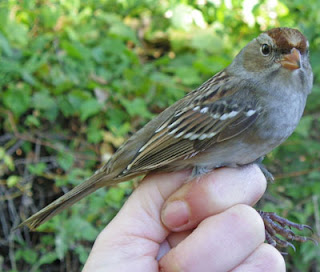 And an after hatching year (AHY), with its striking black and white striped cap. 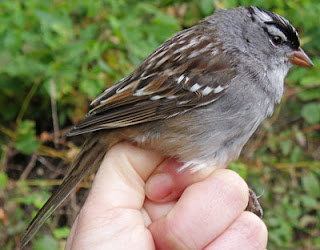 The Purple Finch (PUFI) we captured was a hatching year bird which could not be sexed because of the lack of any red in its plumage. 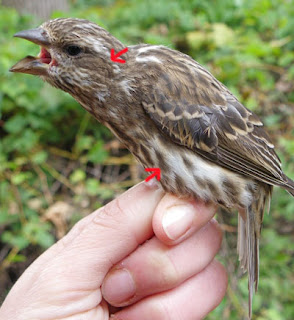 Purple Finches have a broad eye stripe and broader streaks on the breast than their cousins the House Finch (HOFI). The Bird Banding Manual, as part of finch identification, mentions that the PUFI will bite while the HOFI seldom does. How right they are.
The Yellow-bellied Sapsuckers captured were all hatching year birds. Sapsuckers can be identified by their large wing bars. This one is a male with red on top of its head and the throat. The female only has red on its crown. 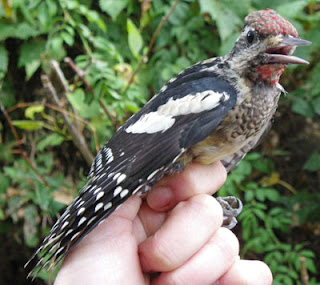 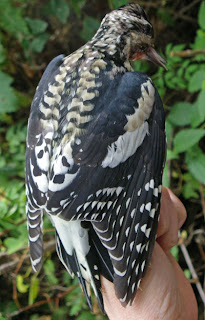 As a result of the low pressure system that is hovering over the northern part of the state, birds are staying low and provide good viewing. It is a good opportunity to get out and view the last of the warbler stragglers before they head for a warmer climate.
If you'd like to see BSBO's research and education teams living up to our tag line "teaming research with education to promote bird conservation," check us out on TV:  WNWO CHannel 24 Toledo!

Posted by BSBO Research Staff at 10:04 AM