A Canadian high pressure dropped down to make it a great day to be outside in the sunshine with birds and several hundred scouts in front of Davis Besse Power Station. Great volunteers kept the birds coming all day as I told the scouts about the importance of the Lake Erie Marshes for migratory birds and then showed them a few birds we banded. Some were really into the birds and others will now know that there are tiny little kinglets in their world.
Back at the banding station behind the power station is where all the work took place. Okay maybe not all of it, but it made my job much easier. One hundred sixty-one new banded birds and 67 recaptures. Yes, as you can guess when someone taking a bird out of the net says they have a banded bird to record, whoever is recording can guess it is a Blackpoll Warbler. However, the banded Mourning Warbler is still hanging around as well. It is well equipped with fat reserves. Maybe it is waiting for a northerly wind to help it go south.

Main Inside top species:
Hermit Thrush-21
Golden-crowned Kinglet-20
White-throated Sparrow-19
Ruby-crowned Kinglet-14
Common Grackle-11
Can you tell the grackles invaded?! These birds should have waited until Monday for Nancy who loves them. They bite and scratch. I think that is what she likes about them.
A quiz bird for you! 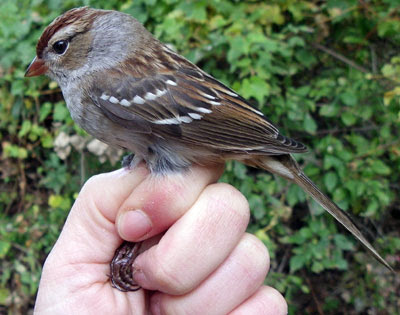 The high pressure system is to stick around for a few days so I do not expect too much movement in. Today there was thirteen species of warblers (Tennessee, Nashville, Northern Parula (a very nice female which I showed off to the scouts!), Magnolia, Cape May, Black-throated Blue, Myrtle, Blackpoll, American Redstart (Also a nice adult male to show the scouts. I call it the Halloween bird with its orange and black costume), Ovenbird, Connecticut (Yes, this is another new banded one!), Mourning, and Common Yellowthroat. You do know what this means don’t you? There are no excuses for you to not get outside and rack up the warbler species. They are still quite a few around!

P.S. quiz bird answer is a Hatching Year White-crowned Sparrow with its brown and tan striped head. You see the similarities to the adult which has the flesh colored beak, and its stripes would be a crisp black and white. I call them Michigan football players because they look likeMichigan helmets with their dark and light stripes similar to a White-crowned Sparrow's head. I probably will upset any Michigan fans unless they too agree with me that the elegant crisp white and black head stripes of the White-crowned look like their favorite football helmets.
P.S.S. Many thanks to Mark, Keith, Tracy, Brenda, and Jay for all their help during the day. It was a longer than ususal day.
Posted by BSBO Research Staff at 7:53 PM