Southerly winds are not helping...

Southerly winds again today produced a low banding total for the day. A nice summer day it was! There were a few migrants around and there were some Tree Swallows migrating today. Twenty birds were the catch plus 4 recaptures. This included a Magnolia Warbler and a Veery that were banded yesterday. Birds are trickling down but not in any numbers to speak of from the Navarre Marsh perspective. 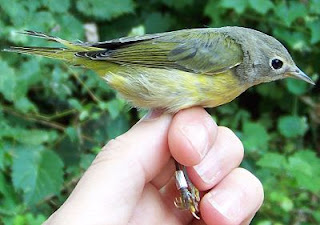 A new warbler species for the fall season: Nashville Warbler.

It stumped a couple of the volunteers. They noticed the eye ring but wanted to call it a Common Yellowthroat or a Connecticut. It was a paler bird but still had the distinctive eye ring. This bird was a hatching year male. It did have a tiny bit of rust feathers on its head. The head marking is not an easy field mark to see in any season.

It looks like maybe Wednesday night a weak cold front will be coming through. We can only hope for rain and some northerly winds. The rain can stop by morning.

Enjoy the beauty of the season!