Monarch butterflies were migrating this morning...

Northwest winds caused the morning net set up to be chorused by burping thrushes. They were thicker than they had been all fall season. Monarch butterflies were migrating this morning also. It appeared that some had spent the night here. It was another beautiful day to add to our best day of the fall. One hundred and five new birds with 8 recaptures which included 22 species of birds. Two of the recaptures were Black-throated Blue Warblers which have been hanging around for a couple days. Ten species of warbler were netted including Tennessee, Black-throated Blue, Chestnut-sided, Black-throated Green, Canada, Nashville, Magnolia, Blackpoll, Common Yellowthroat and Ovenbird. A couple of Rose-breasted Grosbeaks were heard at the site but none came low enough for a visit in the nets. What this means is there are plenty of reasons to get outside and go birding!
Top 5 birds:
Swainson’s Thrush - 29
Gray-cheeked Thrush - 24
Magnolia Warbler - 8
Ovenbird - 5
Blackpoll Warbler - 4 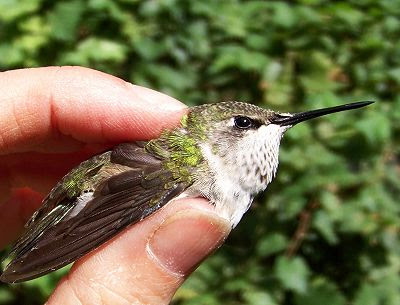 Hatching Year male Ruby-throated Hummingbird with the stripes on its throat including some iridescent feathers present. However, the light was not right for the iridescence to show up. 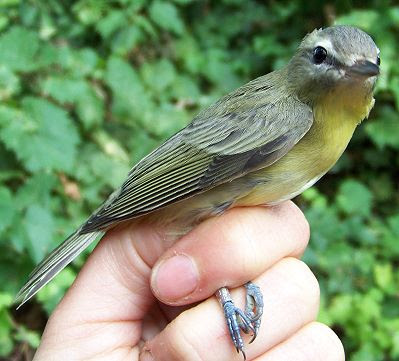 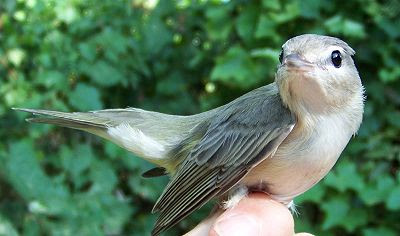 Warbling Vireo
All vireos have blue-gray legs. The best way for me to distinguish between these two vireos is to look at the throat color. Hatching year Warbling vireos can have some yellowish wash to the flanks but never in my experience have yellow on the throat. The Philadelphia to some has a stronger contrast to the supercilium. I have difficulty in seeing the distinction.
Enjoy the beauty of the Season!