Despite southerly winds, we caught our first Ruby-crowned Kinglet!

While I was at an Ohio Wind Working Group meeting today, Mark and great volunteers covered the banding station in my absence. A southwest wind produced 69 new birds in the net with an additional 22 recaptures for a total of 15 species. A majority of the recaptures were thrushes and catbirds. Eleven warbler species were captured today. The first Yellow-rumped Warbler was observed in the trees. Lots of warblers were moving around in small pods but not many were captured in the nets. Highlights for the day included the first ruby-crowned kinglet and a juvenile Cedar Waxwing. The waxwing still had the tawny gray juvenile plumage. 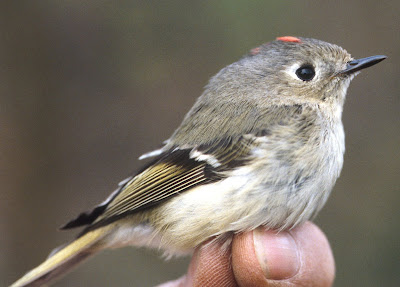 It is still another great day to go outside!
Enjoy!
Posted by BSBO Research Staff at 4:44 PM