Aaah, the tail end of the spring migration has arrived. It is heralded by the song of the Red-eyed Vireo (REVI) and the call "wheacheer" of the Willow Flycatcher (WIFL). The Indigo Buntings made their last push this week. The finale was highlighted with a southern warbler we do not see, nor catch often in the Lake Erie Marsh Region. A female Kentucky Warbler (KEWA) was the grand finale for the last week of migration field work. Not a bad bird to have venture our way.

We were also graced with an American Woodcock (AMWO). Its eyes are placed further back on its head for spying predators more quickly from nearly any direction. Note its stripes on its head are between the eyes or perpendicular stripes to the bill whereas its cousin the Wilson's Snipe has stripes on its head that run parallel to its bill.

The Indigo Buntings (INBU) are dimorphic, with the male and female appearing different in coloration. The female is brown to be camouflaged on the nest and the male reflects bright blue coloration for announcement of its territory.

One of the important values of banding is to get demographics of a population passing through. How many males to females and how many Second year birds versus older birds. In INBUs, banders look at the primary coverts to determine age. The arrows are pointing to the short feathers covering the primary flight feathers. These coverts on the male are not edged with blue and therefore is a Second year bird which means it was hatched last year. It matters not how "Blue" the bird is to determine its age per se. 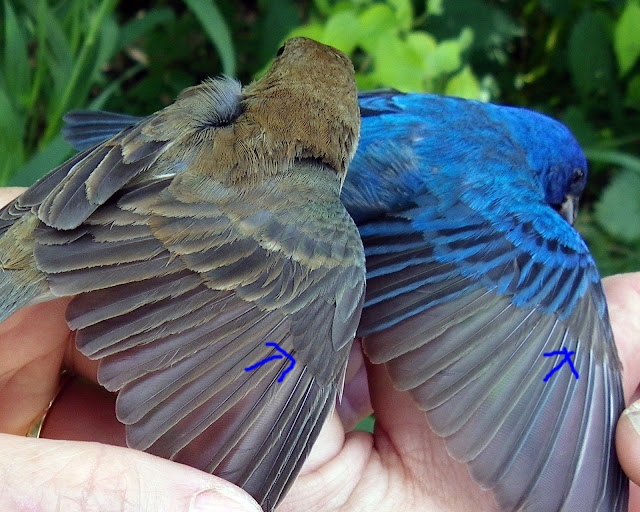 Many, many thanks to the whole host of volunteers who made this spring's migration monitoring season possible. It is because of YOU that we could  have such a successful season! Our hats come off for you!
THANK YOU VERY MUCH! 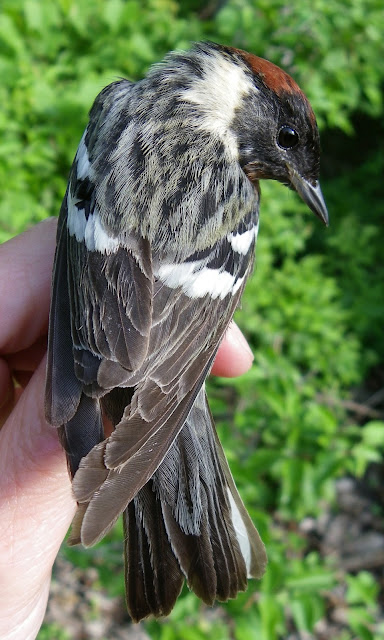 Summer breeding season is upon us, so take time to appreciate those birds in your yard and nearby areas that return every year to nest in the same general location. Doesn't it make you wonder how they manage that feat of locating their home territory year after year? It makes you realize that migration, breeding, and wintering habitats are all valuable and necessary for these birds to survive throughout their life cycle. Enjoy the beauty of the season!

Posted by BSBO Research Staff at 7:05 AM